Country music may not be huge in Westport. But we’re hugely proud of Old Dominion. Lead guitarist Brad Tursi is a 1997 [… … of Mallory Grand McWilliams. Andrew is lead avalanche technician and a ski patrol member at Arapahoe Basin in Colorado. [… The first match of the season for Emory University, and Washington & Lee, was intriguing. The Eagles field 3 former [… Soccer fans have known Kyle Martino ’99 as the Gatorade National High School Player of the Year, an MLS pro [… US Naval Academy graduate and state champion/former captain Sean Gallagher ’11 transitioned out of the Marine Corps in May, after […

Fred Cantor ’71 is a man of many talents. A striker on 2 Wrecker state championship teams, and then a [… Emerson Anvari ’20 Checks In From Hawaii

With COVID making the college experience uncertain, Emerson Anvari ’20 decided to defer admission to Lafayette College for a year. [… 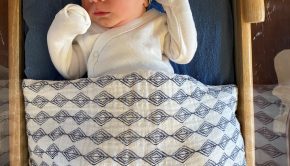