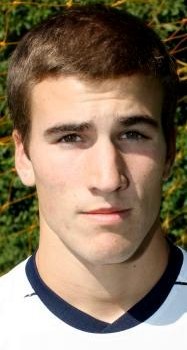 Sean Gallagher and Court Lake were awarded Block “S”s — the 2 highest honors, given by every Staples team.

Gallagher was voted by his teammates as Most Valuable Player.  Head coach Dan Woog noted that though the tri-captain and 4-year varsity player was a defender — “a position with little glory” — Gallagher “got us going, and kept us going.  He led with his voice, his play and his enthusiasm, on and off the field.”

Among Staples soccer’s special qualities, Woog said, is that the team “understands, embraces and celebrates defense.”  Four of the last 5 Block “S” winners — all chosen by players — were defenders or goalkeepers.

Lake won the Coaches’ Award, for Most Improved Player.  Though he saw limited playing time last year, he won a starting spot in preseason, and got better from then on.  By the end of the year, Woog said, Lake was one of the players the coaches built each game’s lineup around.

Steven Denowitz and Connor  Walsh shared the Alumni Award — given annually to the player or players who best exemplify the longtime values of the Staples soccer program.

Woog said that Denowitz “understands exactly what it means to wear the Staples ‘S.'”  Rather than complain about limited playing time as a junior, or missing several matches with an injury after starting as a senior defender, he appreciated every day.  Denowitz has said that playing on the 2010 team was “an honor.”

Walsh — who spent much of 2 years as a backup goalkeeper — “did more than work hard and take advantage of every chance,” Woog said.  “He actively encouraged other keepers.  By training with them, he made them better.  By being the 1st person to congratulate them, he gave them confidence to peform at the highest level.”

The Jeff Lea Award — presented to adults for “long, enthusiastic and meritorious service to the Staples boys soccer program” — went to the 2006 team.  FCIAC champs and state finalists — despite incredible adversity, on and off the field — the squad remains close to Staples soccer in many ways.  Playing with current players in the summer, they push them to improve.  Returning when they can in the fall, they attend matches and training sessions.  Constant emails and text messages keep them connected.

In accepting the award for his teammates, ’06 goalkeeper Dave Sharpe said:

Having the privilege to be involved with Staples soccer is its own reward. Staples soccer has become a major player in our lives, and it always will be. There is no doubt in my mind that those 3 months will be the most memorable of my life. Some of my best and worst moments, my highest highs and lowest lows occurred in that very short span, with a block “S” on my chest; the very same block “S” that we will always wear in our hearts, right alongside #15.

Dave dedicated the award to the memory of Preston Hirten — #15 — and told the nearly 70 varsity, JV and freshman players:

Give back to the program that gave so much to you.  It’s not hard work, and it isn’t tedious.

Though we send countless emails of encouragement or analysis; travel home just for a game before traveling right back to school, we also get the privilege of playing and practicing with you guys.  And, if soccer is as deeply ingrained in your life as it is in mine, once you are no longer playing varsity soccer, whether that begins after high school or after college, you will relish every opportunity you get to play quality soccer.

So come to the Watermelon Cup, show up for short goal at Wakemen during the summer, send some emails and come watch your former teammates play. I promise, it’s more than enough of a reward just to be able to do these things. Who knows?  Maybe you’ll be lucky enough to get your names engraved on the Jeff Lea Award.

The final announcement was of captains.  Junior defender Jake Malowitz and sophomore goalkeeper James Hickok were elected to lead the 2011 team.  Woog saluted the choices as “excellent.”

In addition, freshman Connor Weiler received the Stephen Martin Award, for combining “the desire to excel with the willingness to work and the eagerness to share.”

In remarks presenting the 2010 team, Woog noted that before 2008, no Staples team had won 20 games in a year.  Seven seniors have now won at least 20 games 3 times.

The FCIAC 3-peat was Staples’ 1st since 1979-81 — when some of their parents were in high school or junior high.

More important, Woog said, was the way the Wreckers “understood all that came before them, and all that will follow.”  He cited the impact of Shane Kennedy ’72 — the NCAA-record setting keeper at Babson College, who spent a week with the team in October — on generations of players.

Woog noted that Staples’ fans this year included Andy Udell ’88’s son, and Dan Donovan ’82’s 2 boys.  “Some day,” Woog said, “an even younger generation of players — not yet born — will watch Max Udell, and Johnny and Patrick Donovan play.  That’s the magic of Staples soccer.  It is a credit to the 2010 team that they understand and embrace this.  We asked them to write their own chapter in the Staples history book — and they did.  Now they’ve inspired the next generation to do the same.”