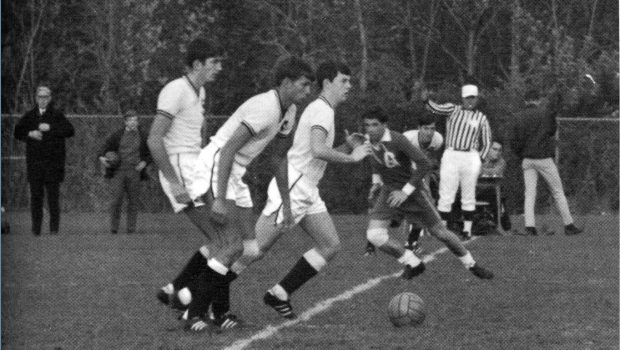 With only 34 days left before Staples soccer’s 60th anniversary celebration, our “60 for 60” series continues. Here’s a recap of the past week’s fun facts:

— Staples soccer began when a group of Weston students (who then attended SHS) asked physical education teacher Albie Loeffler to form a club. All had played soccer at Weston Junior High. One of the key players on that first club team was Norwegian exchange student Per Haarr.

— Staples’ all-time record against the old Andrew Warde and Roger Ludlowe high schools was 65-1-0. They merged to become Fairffield High in 1995. Fairfield Warde and Fairfield Ludlowe were re-formed in 2004.

— Westport’s junior highs — Bedford and Long Lots — began competitive soccer in 1963. Coleytown joined them when it opened in ’65. They played against each other and other towns until 1983, when 9th graders moved up to Staples.

— Staples has had 2 players each named Mike Smith, Mike White, James Manning and Tom Jones. None are related. There was also one named Brian McMahon.

— Staples soccer has had only 3 full-time head coaches since 1958: Albie Loeffler, Jeff Lea and Dan Woog. Frank Henrick was a 1-year interim during Loeffler’s 1969 sabbatical — and won a state championship. Twenty years later, he won another state title as head coach of the girls team. This rare photo shows all 3 of Staples’ full-time head coaches. Albie Loeffler stands at left. Jeff Lea peeks out around the referee, from the scorer’s table. Dan Woog — then a Staples sophomore — is the ballboy, standing next to Loeffler.