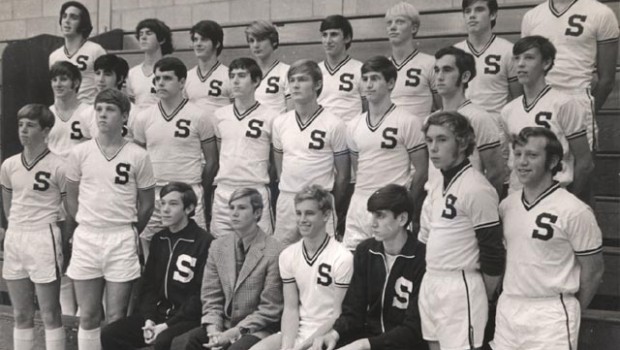 He loves debating the age-old question: “What was the best team in Wrecker history?”

He also is an avid fan of the current program. He’s a constant presence on The Hill, and a steady behind-the-scenes supporter too.

A couple of months ago, Fred had an idea: Honoring the state and FCIAC champion ’70 squad (see its remarkable achievements below) on its 50th anniverary, while also sending best wishes to the 2020 team.

The result is a very cool video, with “cheers” from many of those former stars — all saluting this fall’s future stars. Fred got his teammates — now spread across the country — to submit their “toasts.” Then he worked with Alan Fiore — a rising senior, and 2-year varsity player — to produce the video. It’s a takeoff on the famous “Captain Morgan” ads.

The story was picked up today by the national Top Drawer website. Here’s that story — and a link at the end to the video.

2020 marks the 50th anniversary of the season played by perhaps the most accomplished senior class on a single team in the history of American high school soccer.

Among other achievements, 10 seniors on the 1970 Staples High School (Westport, CT) soccer squad went on to become a captain of their college team.

So, to commemorate that feat, the 1970 Staples soccer team alumni have (virtually) come together to make a video edited by current Staples soccer player Alan Fiore that is a takeoff on the Captain Morgan TV commercial.

The 1970 Staples HS soccer team featured an all-senior starting lineup, seven of whom had been starters on the 1969 state title team.

The ‘70 squad did not surrender a single goal in games played against CT opponents as it won its league title by a record margin in the championship game, 5-0, and then earned a second consecutive state championship after a 0-0 tie in the CIAC Class L final (at that time the largest-sized school class in soccer in CT).

In the process, the team set a then-national single-season record of 16 consecutive shutouts; and that streak of 16 is part of a still recognized national mark of 25 shutouts in a row over two seasons.

Four of those Staples seniors played on college teams that qualified for the NCAA D1 tournament and six others played on squads that made it to D2 or D3 postseason tourneys.  (And this was at a time when schools from the different divisions played against one another during the regular season.)

Four of the seniors earned all-regional honors in college; one of those four received All-American honors and he went on to play professionally in the North American Soccer League and for the U.S. National Team.

Last but not least, a 14th senior who was an occasional sub in 1970 went on to become a state- and league-champion coach: current Staples boys’ head soccer coach, Dan Woog (who is only the third head coach in the 62-year history of the team—not counting a coach who served for one year during a sabbatical by Albie Loeffler, the program’s founder).

The 10 seniors who became captains:

Hunter and McCoy both were selected to play in college soccer’s Senior Bowl in 1974 (and McCoy was Duke’s third-leading career scorer at the end of his senior year).

Hunter, McCoy, Hollingsworth, and Levin earned All-Regional honors; and Hunter was an Honorable Mention All-American, who played for the US National Team in the 1975 Pan American Games and also played in the NASL for several years before injuries curtailed his career.

(Click here for the full Top Drawer story, with photos.) The FCIAC and state champion 1970 team.