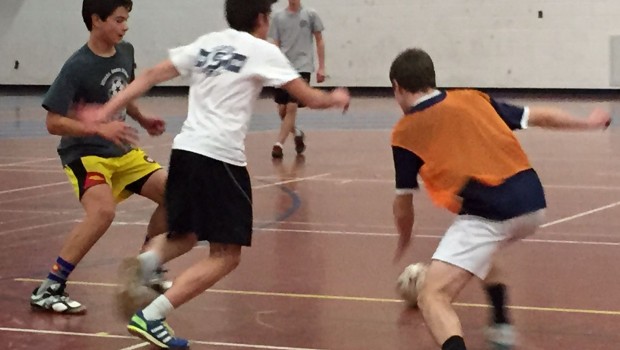 For the 2nd year in a row, a team comprised of young players won the Loeffler Indoor Tournament.

The annual event — played in the Staples fieldhouse — is a fundraiser for the Loeffler Scholarship  Fund. Each year, an award worth $3,000 is given in the name of the founder of the Staples boys soccer program.

Winners of the 5-team tournament were Patrick Beusse, Kenji Goto, Charlie Leonard, Jordan McNair, Aidan Wisher and Kyle Zajec. They play for a variety of teams, including Staples, Beachside, Red Bulls and Union College, and include 1 former and 1 current Staples captain. Goto, Leonard and Zajec were also on last year’s winning squad.

The oldest player was Steve Baumann ’70. A former University of Pennsylvania All-American, NASL player and UPenn coach, he is now executive director of the Discovery Museum in Bridgeport.