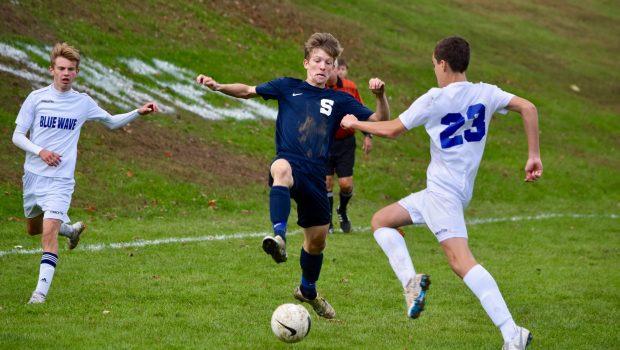 When the Staples boys soccer program scheduled their 60th anniversary celebration for today, they figured it would attract scores of alumni. In fact, over 100 came for the tailgate, game and party — from as far away as California, and as way back as the 1960 team.

The Wreckers also knew they’d have a formidable foe in Darien. They did not know though that both teams would be fighting for a home game in the FCIAC tournament that begins in less than 2 weeks.

And Staples also did not know that the many alums — and the rest of the crowd on the packed hill — would see a throwback match.

With Loeffler Field soggy from weeks of rain — and muddy from this morning’s girls game (a nice 3-0 win over Fairfield Ludlowe) — by halftime, players looked like they’d been through a war. It’s a look many alums could relate to — but one many current players seldom know, because so many matches these days are played on turf.

Despite the conditions, the Wreckers played good Staples soccer. They put the ball on the ground, played to feet, raced forward and utilized the flanks. They combined for nifty give-and-gos, and knew when to be selfless but also when to take opponents on.

They also stuck in hard on 50-50 balls, jumped high for headers, and gave no quarter on defense.

But Darien — a team that had beaten Greenwich, and is always well-coached — was equal to the task.

The hosts had a few good chances. Nick DiMasi — a monster up front — and Matthew Tanzer missed just wide in the first half. Austin Sholes and Gabe Baltierra fired strongly in the 2nd. Vaughan Sealey and Sam Liles worked the wings well, often finding Mauricio Inglada and Lefty Penderakis.

Defensively, Patricio Perez Elorza was a force, not only winning balls but initiating attacks. His counterpart on the left, Rob Diorio, was a very steady presence. Nick Ambrose and Surya Balaji kept things tight in the back. Behind them, keeper Ry Cohen made one key save in each half.

Staples battled to the end, earning a corner kick with just a minute to go. But the game was destined to end 0-0. It was a score, a type of game — and conditions — that many alumni could relate to.

QUICK KICKS: A story — and photos — about the alumni will be posted on StaplesSoccer.com tomorrow ….

Staples thanks Darien coach Jon Bradley. He agreed to change the day of the varsity game from Friday to Saturday — and to change the site from Darien to Westport — in order to accommodate the Wreckers’ 60th anniversary celebration….

The reserves dominated play early yesterday in Darien. A screaming volley by Emerson Anvari hit the crossbar. A defensive error gave the Blue Wave the first goal, though. Some solid buildup play led to a goal by Alan Fiore, a beautiful lofting shot far post. But Darien retaliated with an easy tap-in. Anvari hit the post again in the closing seconds of the 2-1 loss. Past and future: Alumni (with souvenir scarves) enjoy the match — and so do reserves, standing behind. (Photo/Armelle Daniels) Matthew Tanzer had another strong match at midfield. (Photo/Armelle Daniels) One Response to Match Report: Staples vs. Darien