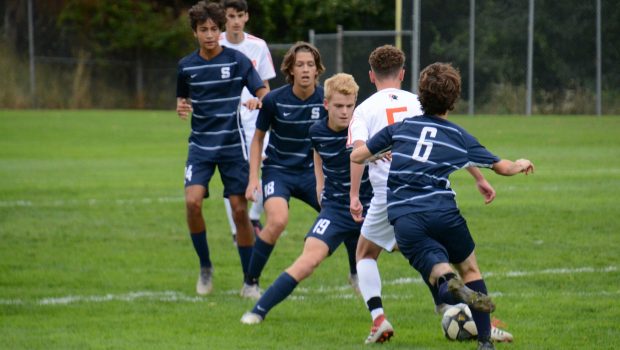 Soccer is a game of inches. And opportunities seized, or missed.

The inches went against Staples this afternoon. The Wreckers outshot visiting Stamford 17-6. They had 7 corner kicks, to the Black Knights’ 3.

Many of those opportunities were great ones. Patricio Perez Elorza’s corner kick was headed off the goal line. Evan Birns’ close-in shot from the endline trickled across the goalmouth. Emerson Anvari’s header just missed. A late goal was nullified due to offside. There were others.

Stamford rarely threatened. But they capitalized on a pair of second-half chances — one on a counterattack, the other on a long, looping shot — and made them stand up for a 2-0 victory.

It was a frustrating day for Staples. Offensively, they moved the ball well on the damp grass. Defensively, they kept the guests far from goal. Keeper Reed Caney was tested once, and punched clear decisively. But squandered opportunities meant a lost chance to gain 3 important points in the tight FCIAC playoff race. Trumbull tied St. Joseph and Norwalk drew with Danbury — both 0-0 — so Staples continues to battle for post-season qualification. They resume the fight Tuesday in Ridgefield. Kickoff is 4 p.m., at Tiger Hollow. FINAL SCORE: Stamford 2, Staples 0. SEASON RECORD: 5-3-2.

QUICK KICKS: 1st selectman Jim Marpe was at the game ….

The reserved topped Stamford 5-1, in their best game of the season so far. Zach Pulichino had a hat trick — including 2 penalty kicks. The Wreckers showed “perfect team combination play all around,” says coach Russell Oost-Lievense. Another goal was a beautiful team effort. Aaron Jaffe played a final cross in to Reese Watkins for a training film finish. The midfield of Pulichino, Thomas Corridon, Graham Barnes and Sam Vannart excelled. Watkins was a presence, while the back 4 of Jaffe, Matt Jordan, Kyle Rotolo and Jackson Hochhauser also played well. Oost-Lievense cited his substitutes, and keeper Enzo Valadares, for their efforts….

The freshmen shut out Stamford 2-0. The Wreckers scored 20 minutes in on a Josh Deitch side volley off a gorgeous Jaeon Anglin cross. Deitch also knocked in a 2nd-half penalty kick. Coach Chris O’Dell’s defense played excellently; the only Knight shots on goal came off free kicks. Kyle Ambrose and Ethan Cukier had strong games on the flanks. The frosh are now 6-1-1. Benny Feuer was Staples’ Man of the Match against Stamford. (Photo/Christina Bassler)