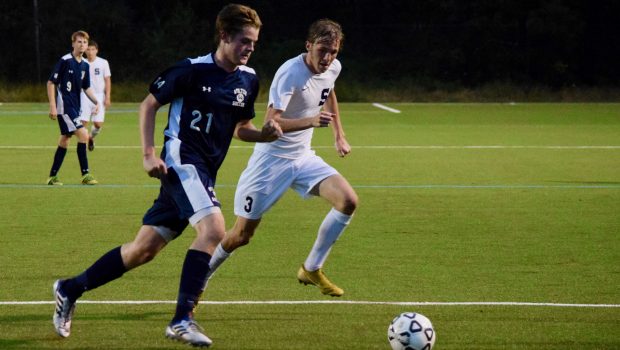 Staples loves playing on Kristine Lilly Field. The Wilton Warriors’ home turf is wide, and the competition is always strong but respectful.

Today, the Wreckers had a treat: They were the opponents in the first-ever varsity match played on the newly renovated surface. (The real first game was the reserves one that immediately preceded this one. Staples won 2-1.)

The guests opened with Josh DeDomenico making his first varsity start. The junior played confidently, simply, and looked strong on both sides of the ball.

The Westporters were in command at the start, but after a quick Austin Sholes shot and a great Wilson Daniels ball into the corner, keeper Ry Cohen saved a 1-on-1. Then the Warriors banged a dangerous shot off the near post.

Sholes shot again, just high. Suddenly — against the run of play — Wilton’s Michael Zizzadoro took advantage of even numbers defensively, drew out the goaltender and scored at a sharp angle.

The Wreckers drew level 6 minutes later. Sholes fed Nick DiMasi. He cruised into the box, cut back and shot. The keeper gave up a rebound. DiMasi pounced, and put in his second attempt with authority.

Penderakis again came close; then he headed a corner kick off the cross bar.

In the 55th minute, Perez Elorza lined up for a free kick 40 yards out, on the left side. His attempt lofted over the defense, the Staples players camped in the box, and the keeper, for a dramatic goal and a 2-1 edge.

The Wreckers played smart, hard soccer, protecting their lead and pushing for an insurance goal. Sam Liles worked the right side; Mauricio Inglada combined strong pressure, speed and shifty moves up top; Rob Diorio looked strong in his run, and the defense of Nick Ambrose, Surya Balaji and Gabe Baltierra hunkered down.

It was a hard-fought, well-managed win. Three of Staples’ 4 matches this year have been similar battles. Many more loom ahead — starting Friday, against the surging Trumbull Eagles. Kickoff is 4 p.m., at Loeffler Field. FINAL SCORE: Staples 2, Wilton 1. SEASON RECORD: 3-0-1.

QUICK KICKS: After 3 straight postponements, the reserves opened their season like the varsity: with a come-from-behind 2-1 victory. Graham Barnes got the tying goal, on an assist from Lars Djuve. Emerson Anvari nailed the game-winner, on a long, well-taken shot….

The freshmen won a chippy match 1-0, against a very strong Wilton side.

We won 1-0.  It was a pretty chippy contest. Will Adams scored on a rebound, one minute into the 2nd half. The back four of Ryan Thomas, Bruno Guiduli, Josh McCall and Brewster Galley played excellently, said coach Chris O’Dell. The official did not show up, so 3 Staples girls players — Charlotte Zhang, Lys Goldman and Madison Galley — stepped in and did superbly. Wilson Daniels is intent on beating Parker Ward to the ball. (Photo/Armelle Daniels) Austin Sholes gets ready to tackle away from Karl Pfeiffer. (Photo/Armelle Daniels) One Response to Match Report: Staples vs. Wilton