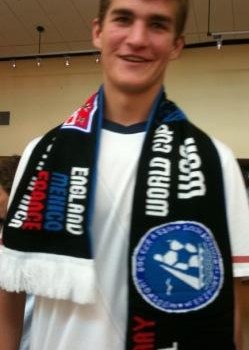 Michael McCarthy has been awarded 2 of Westport’s most prestigious scholarships.

The state championship goalkeeper — who continues his career this fall at Washington University in St. Louis — won the Coleman Brothers Foundation and Loeffler Scholarships.  The awards were announced tonight, at Staples’ annual Scholar-Athlete banquet at Norwalk’s Continental Manor.

The Coleman award — named for Scott Coleman ’88 and his brother Keith (a Staples wrestler), bothwere killed at the World Trade Center on 9/11 — is presented annually by the Westport Soccer Association.  This year the Gudis Family Foundation matched the WSA’s $5,000 contribution, for a total of $10,000.

The presentation was made by Todd Coleman ’84, a former Staples captain.  The honor was particularly meaningful, he said, because he knows Michael’s father:  Stuart McCarthy ’79.  Neil and Jeanne Coleman — Todd, Scott and Keith’s parents — also attended the dinner.

The Loeffler Scholarship is presented annually to a Staples athlete who has played at least 2 varsity seasons in a sport Albie Loeffler coached (soccer, basketball, baseball/softball or track).  The winner must exhibit high personal standards, and a commitment to excellence.  Michael’s father was coached by Loeffler — who was himself a goalkeeper at the University of Connecticut in the 1930s.

The Loeffle Scholarship was worth $3,000.

Congratulations to Michael, Nick and Jack!