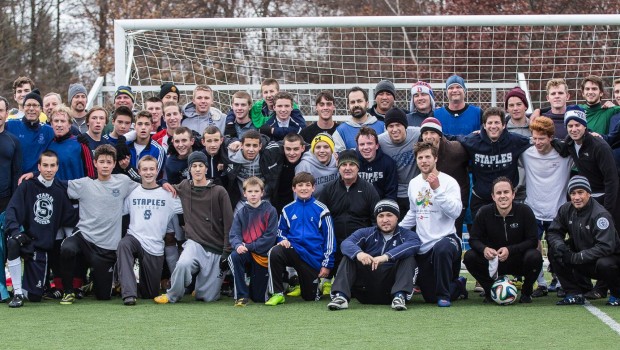 It was a record crowd. Besides the stiff competition — featuring excellent Staples soccer — there was plenty of catching up, many congratulations (for successful seasons just completed, new jobs, etc.) and lots of laughs.

Steve Baumann ’70 — an All-American at the University of Pennsylvania and former NASL star — was the most seasoned player. Mark Noonan ’83 came the furthest distance, having just arrived from Maui. Jim Leonard ’77 was in from Santa Fe, where he serves as headmaster of Santa Fe Prep (and coach of their state championship varsity team). Jim’s nephew Charlie Leonard ’14 played too. Other relatives combinations included Stuart McCarthy ’79 and Michael ’10; Kurt Dasbach and Shane, and brother acts like the Geringers, McNairs, Reids, Pensaks, Birches and Hobermans.

Just before noon, it was all over. Wreckers old and young worked up great appetites for Thanksgiving — and had a ton of fun in the process.