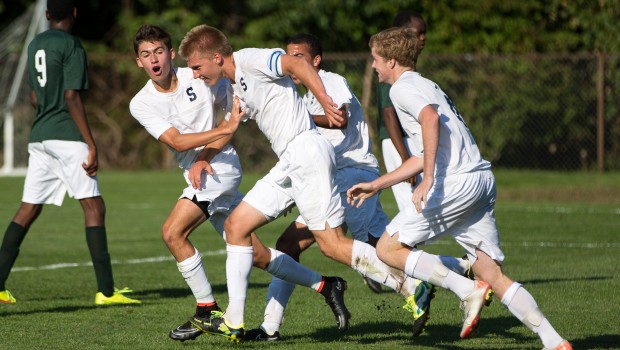 The 3 Bridgeport schools entered the FCIAC in 1995. Two — Bassick and Harding — will leave the league next year.

Going into today’s home match, the Wreckers held an 11-0-0 record against the Lions. They’d outscored them 51-3.

But — because there are 19 FCIAC teams, and state regulations permit only a 16-game regular season — Staples and Bassick have not met since 2010. Meanwhile, coach Saleh Hanaif has built his side into a very respectable group. Gone are the days when “Bassick” meant “easy win.”

With Jamaican transfer Tavoy Morgan showing great moves up top, the Lions drew first blood. In the 15th minute Morgan struck from the left side — his 5th goal in just 3 games.

In the 26th minute — with Puchala and Berman both forward for a free kick — Pensak collected a short pass and shot from the outside. It was blocked, but Berman alertly toe-poked it in. It was the sophomore’s 2nd goal in as many matches.

Three minutes later, Reid was taken down. His free kick skittered through on the ground, where Puchala pounced for a sudden 2-1 lead.

And 3 minutes after that, excellent team defense led to a long Pensak throw. Nate Argosh slotted a ball through, Patrick Beusse timed his run perfectly, and now it was 3-1.

Another 3 minutes went by, and against Staples scored. Daniel Brill fed Argosh, who capped a long breakaway with a poised finish.

The Wreckers made a few lineup changes to begin the 2nd half. Brill’s shot caromed off the post; Matt Bateman just missed potting another.

Berman came close on a header, but the Lions were not done. A long throw led to a great shot off the crossbar. Raybon Carwin was there to slam home the rebound.

With keeper Noah Schwaeber outletting quickly, the Westporters continued to attack. Daniel Perez Elorza nearly scored, off a Pensak feed, and then a 2nd Staples strike smashed into the post.

Perez Elorza and Pensak combined nicely once more. Spencer Daniels almost tallied. Then the Wreckers — led by Argosh, Reid, his brother Daniel and Aidan Wisher — managed the clock well to the end.

“Huge props to [Bassick coach] Sal and his guys,” said Staples head coach Dan Woog. “They’ve become a very competitive program. We’ll miss having them in the FCIAC. They brought out the best in us today. I’m pleased we really played our game. And for the 2nd time in a row, we came back from 1 goal down. We don’t like having to do that — but we’re proving to ourselves that we certainly can.” FINAL SCORE: Staples 4, Bassick 2. SEASON RECORD: 2-1-1.

The annual car wash is this Saturday (September 20), 10 a.m.-4 p.m. at Christ & Holy Trinity Church on Myrtle Avenue at Church Lane, across from Java…. Michael Reid was the field general for Staples against Bassick. (Photo/Kim Lake) Several starters cheer their teammates on during 2nd-half action against Bassick. (Photo/Kim Lake)