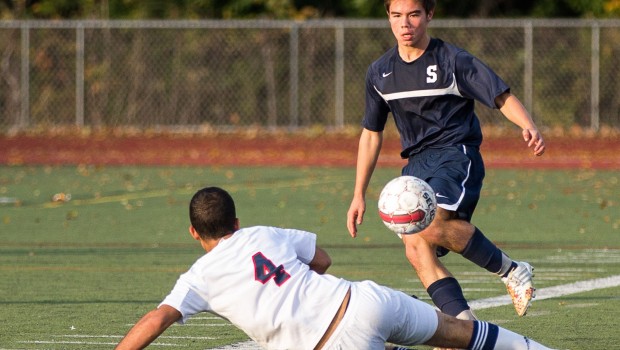 The Wreckers were scheduled to play at Jack Casagrande Field 2 weeks ago. The match time was moved weeks before that, from 7 p.m. to 4:45 p.m. Somehow, the officials never got word. They did not show, and the game was rescheduled for last Thursday.

A couple of hours before boarding their bus for the night game, Staples got word that a transformer had blown. No lights = no match.

So the game was shoehorned in for today — 3 days after Trumbull, less than 24 hours after Fairfield Warde, the day before Harding. There is no rest for the weary.

But the blue-and-whites heard about the 2005 team, which won 3 games in 3 days — all must-wins, all on the road — and vowed to do the same. A spot in the FCIAC playoffs was on the line.

So — tired but ready — the Wreckers arrived again at McMahon. Denzel Robinson got a start at midfield, after his performance last night. His job: add to the pressure applied by Nate Argosh and Daniel Perez Elorza.

In the 8th minute, Grant Sirlin’s throw-in on the left side was flicked on by Michael Reid. Perez Elorza — on the left side of the box, 25 yards out — lofted a Luis Suarez-style shot. It sailed far over the keeper, nestling gently into the far side netting.

But McMahon — needing a win to qualify for the state tournament — did not give an inch. With crafty midfielders, they were a team to be reckoned with. Jack Zeldes came off the bench to do solid defensive work, in front of Sirlin, Josh Berman, Gabe Pensak and Kenji Goto.

In the 34th minute, keeper Noah Schwaeber got decked making a save. He held on, sending a message to both teams.

The Senators came on strongly after intermission. But Reid’s ball control, Beusse’s runs forward, and the work of Daniel Brill and Daniel Reid up top kept McMahon honest.

The final 10 minutes were nail-biters. The hosts had a succession of corner kicks and free kicks. Each time, Schwaeber and the defense — meaning the entire Staples team — hung tough. Sirlin cleared one particularly dangerous ball nearly off the line. A Schwaeber save with 3:30 to go sealed the victory, though McMahon had 2 more chances after that.

The hard-fought win earns Staples a slot in the FCIAC tournament, for the 7th consecutive year. They’ll face either Fairfield Ludlowe or Danbury on Friday — depending on the results of tomorrow’s matches. Staples plays Harding (4 p.m. at either Loeffler Field or Wakeman, depending on weather), while Wilton hosts Danbury. Jack Zeldes came off the bench to turn in a fine performance at Brien McMahon. (Photo/Kim Lake) Noah Schwaeber makes the save — and a McMahon Senator earns a yellow card. (Photo/Kim Lake) Daniel Perez Elorza got the game winner at Brien McMahon — though this was not it. (Photo/Kim Lake)