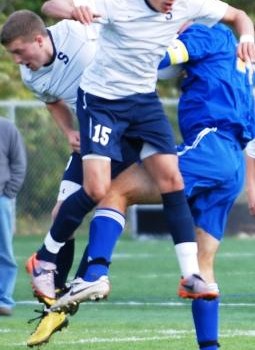 In just 3 years, Staples-Brookfield has turned into a superb rivalry.

The 1st 2 times, the non-league meeting has proven pivotal for the Wreckers.  Two years ago a 3-0 home victory — immediately following a 1-0 loss to Norwalk — propelled Staples to a 13-game winning streak, an FCIAC championship and a berth in the state semifinals.

Last year the Bobcats got revenge, 3-1 on their turf.  But the Westporters used the loss — their 1st of the season — to realize they were not invincible.  They redoubled their efforts, and went on to capture the state LL championship.  Brookfield, meanwhile, gained confidence from their decisive victory — and won the state L crown, in a come-from-behind win over New Canaan.

This year’s match-up was highly anticipated.  Brookfield arrived at Albie Loeffler Field with an unbeaten (8-0-2) mark, a bit better than their hosts’ 8-2-1.   But the Wreckers had been playing well, and were fully focused on the task at hand.

An enormous crowd on The Hill sat back to enjoy a glorious — if windy — fall Saturday afternoon.  Staples won the toss and chose to go with the wind — which gusted up to 50 miles an hour at times.

It took just 4:32 for the Wreckers’ attack to pay dividends.  Frankie Bergonzi’s long throw set Max Hoberman on a run.  He hit Greg Gudis, who slotted over to Lorenz Esposito.  The sophomore’s shot was saved by keeper Austin Dacuna, but Mikey Scott was right there to tap in the rebound.

Seven minutes later it was 2-0.  Sean Gallagher’s free kick was half-cleared, but Esposito picked up the loose ball.  He took 2 touches, then blasted a 30-yard rip that sailed untouched into the upper corner.

Less than a minute after that — a mere 12:04 into the match — Staples struck again.  This time Jake Krosse pounced on a loose ball; his 35-yard rocket was even harder, prettier and more exciting than Esposito’s (if possible).

The blue-and-whites had a few more chances to get a 4th goal before halftime — particularly on balls from Esposito and Court Lake that sent an overlapping Bergonzi in, and a strong attempt by Gudis — but the best opportunity came 1:30 from time.

Brendan Lesch — who sparked his side with strong runs forward, visionary distribution and stellar defense — had what looked like a sure goal cleared off the line.

The Wreckers faced the wind in the 2nd half, but their intensity never wavered.  With Lesch running the show; Lake and Krosse winning key balls and initiating attacks; Gudis, Scott and Hoberman running through; Bergonzi, Gallagher and Jake Malowitz defending together and providing cover, and keeper James Hickok snagging the few balls he had to, the blue-and-whites controlled both the tempo and style of play.

In the 53rd minute Hoberman raced into the red zone.  His crisp cross was dished off by Esposito to a well-positioned Steve Smith.  In a move right out of training, Smith stuck it home.

Smith almost got another, 2 minutes later, but was called offside.  But the 5th goal did come, off an alert play by Alex Tonsberg.  He scooped up a loose ball, took a couple of touches to settle, then calmly chipped the keeper.

Brookfield’s Colin Burke averted the shutout with 4:28 to play, but the damage had been done.

The coaching staff was as pleased with the result as the large hillside crowd.  “There was a lot to like,” said head coach Dan Woog.  “Our defense was alert and tight.  We moved the ball nicely all over the field.  This was a completely unselfish game.  Guys looked for teammates, found them, and got balls back in return.

“And the fact that 5 different players scored speaks volumes.

“I think everyone had fun.  This should give us confidence and momentum going forward.”

QUICK KICKS: Mikey Scott wore #22, instead of his traditional #14….

Fans are used to watching Brendan Lesch and Frankie Bergonzi chest-bump after goals. Here they make contact, winning a ball for Staples against Brookfield. (Photo by Lisa Krosse)

3 Responses to Staples vs. Brookfield