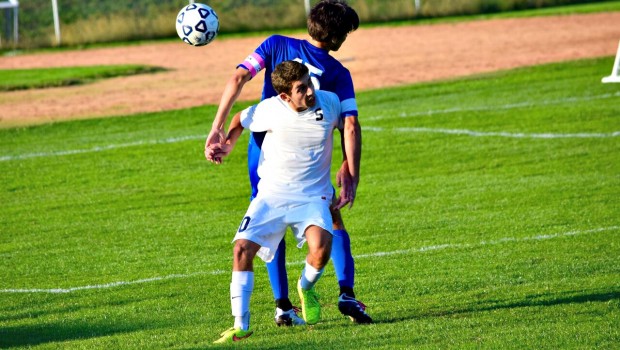 Nearly every match this season has a back story, dating to last year or the one before. But none is more compelling than today’s.

Last November — after 2 thrilling state tournament victories — the Wreckers fell 2-0 on a cold, windy Darien day. They were sky-high for this rematch.

The Blue Wave, meanwhile, felt they’d gotten little respect, either last year or this. They wanted to prove they’re for real.

In this year of great FCIAC parity, the match took on added significance. The home-standing Wreckers came in with a 6-1-2 mark. The guests were 4-1-4.

Staples defended well against Darien’s long-throw — unleashed by strong center back Andrew Mathew. They played well to feet, and after some initial problems began winning a good share of 50-50 balls.

Jack Zeldes — making his 1st start since an eye injury early in the season — helped solidify midfield. And when Daniel Perez Elorza made a great move on the right side in the 30th minute, then slotted a ball across the goalmouth, it was Zeldes who knocked it home.

Play got chippy as the 2nd half progressed. Darien’s Sean Gallagher equalized in the 64th minute, but 7 minutes later Wisher drove into the box. He was taken down, and — as assistant coach Kurt Dasbach had predicted before the match — the Wreckers had their 2nd penalty kick of the year. Gudis converted cleanly. Just 9 minutes remained.

Staples knew they had to manage the clock. The Wave sent everyone forward — including, on a late free kick, keeper Liam Rischmann.

But in the ever-rising  heat of the game, the Wreckers did not always take their time. An unnecessary yellow card stopped the clock. They put the ball in play quickly on a goal kick. Twice, they did not take the ball into the corner. Still, the seconds ticked down.

Darien had one final throw-in. For the 1st time all game, Staples did not clear. Sam Pfrommer found a loose ball in close range, and converted.

The Wreckers earned 1 point with the draw — but they knew full well they’d let 3 points slip away.

“All sports — and soccer in particular, because it’s such a low-scoring game — teach incredible lessons,” head coach Dan Woog said. “After the match, we talked about the importance of carrying this lesson not just through the rest of the season, but for everything we do in life. It was a devastating way to tie. But if we never let this happen again — if we truly understand the importance of poise in the face of chaos — then this could be our most important match of the year.” FINAL SCORE: Staples 2, Darien 2. SEASON RECORD: 6-1-3.

QUICK KICKS:  This was the 1st match all year in which Staples let up more than 1 goal….

Spencer Daniels was named Norwalk Hour Athlete of the Week… Kenji Goto and Noah Schwaeber, ready for anything. (Photo/MaryGrace Gudis) Kenji Goto is a dominant force at center back. (Photo/Armelle Daniels)