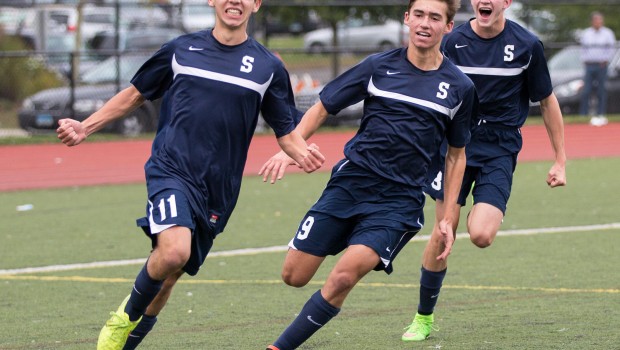 Entering today’s match, 3 FCIAC teams remained undefeated. Norwalk was 9-0-3; Staples lost 1-0, on a late indirect kick. Danbury was 8-0-2; the Wreckers tied them on a strike with 5 seconds left before halftime.

Staples unveiled a new defensive alignment, featuring Kenji Goto, Josh Berman, Jack Zeldes and Grant Sirlin, and for long stretches of the 1st half they shut down the Falcons. Patrick Beusse’s work on the right side complemented Michael Reid and Gabe Pensak in the middle. The Wreckers got good pressure up top from Daniel Perez Elorza, while Nate Argosh worked the left.

Ludlowe featured a pair of tall attackers, and a long throw. The blue-and-whites trained against that yesterday, and they were alert defensively.

The final 2 minutes of the 1st 40 were crazy back and forth. Ziggy Hallgarten’s fingertip save just before the buzzer kept the scoreline clean.

Seven minutes after intermission, Reid laced a long direct kick. Berman, then Beusse headed it along. Perez Elorza pounced on the loose ball in the box. Suddenly, the Wreckers held the upper hand.

Just as suddenly, 3 minutes later, the hosts equalized, on Matthew Doyle’s header off Michael McArdle’s cross from the corner.

They snagged the lead 7 minutes after that thanks to Niklas Stahle, on the only breakaway the Wreckers allowed.

The rest of the match was evenly fought. Staples’ best chance came 6 minutes from time. Perez fed Reid on the right side. He sliced through the box, but his rocket was saved nicely by keeper Frederick Meagher.

“We’ve shown we can play with the top teams in the league,” said head coach Dan Woog. “I feel badly for our guys that they just have 1 point to show for it. But we’ve built a very strong foundation for the final 6 matches. The players and coaches feel confident that we’ll finish strong, and have plenty of momentum heading into the post-season. We always say ‘it’s not how you start, it’s how you finish’ — and we are ready to finish well.”

It’s a grueling stretch, with 6 matches in 10 days starting Monday (vs. Trinity Catholic at the Wakeman turf, 4 p.m.). But, Woog noted, “this is what we’ve been working for since last December. Bring it on.” FINAL SCORE: Fairfield Ludlowe 2, Staples 1. SEASON RECORD: 4-4-2.

QUICK KICKS: The Trinity Catholic match Monday is at the Wakeman turf. The girls team will play on Loeffler Field, in an important rescheduled game vs.  Wilton….

The Brien McMahon contest — postponed when the officials did not show up last week — will be played on Thursday, Oct. 16, 7 p.m. at McMahon….

The junior varsity fell 2-1 to Fairfield Ludlowe. The Falcons scored first; Staples leveled 20 minutes later, off a great through ball from Steven Rowland to Rory Steele. The game winner came 4 minutes from time, after an attempted clear from a corner kick. Nick Benjamin, Matteo Broccolo and Thomas Heisler looked sharp for the Wreckers….

The freshmen downed Fairfield Ludlowe 5-1. Ian Weiler scored twice, and almost had a hat trick when he dribbled some defenders and put one off  the top crossbar. Steven Frost followed up and knocked it in. Tyler Wright scored too, while Jonathan Kaner netted the final goal on a 1-time volley into the upper corner. The defense of Alex Piccolino, Jessie Haymes, Ryan Fincher and Chris Martenson  played strongly. Coach Chris O’Dell lauded a “great overall offensive effort, good ball movement and crisp passing.” In the final minutes of the Fairfield Ludlowe match, the entire bench is up and into it. (Photo/Kim Lake)