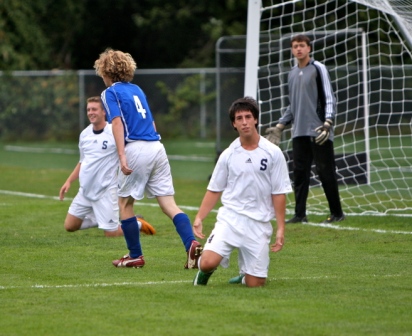 The Falcons entered today’s match with the same claim as the Wreckers:  undefeated.  Staples’ 3-0-2 neighbors to the east had an excellent start to the season, against a rougher schedule than the Westporters.

Loeffler Field was almost unfamiliar to the Wreckers.  Though almost October, this marked only the 2nd home match of the year — after a 4-game road trip.  No matter.  Staples did what they’ve done in all but 1 game so far:  score near the 10-minute mark.  The play began with defender Frankie Bergonzi — starting his 1st game all fall, following a broken toe — hitting Mike White wide.  The tricky forward turned inside, out, then back inside before slotting a straight-out-of-“shoot-the-moon”-training ball to Greg Gudis.  The junior, parked in front of the goal, tucked it neatly home.

The Falcons threatened, in large part because Staples gave them more room than usual.  But the Wreckers also went forward often.  A nifty goal off Mike Scott’s throw was called back in the 23rd minute.  Four minutes after that Bergonzi made a fine run forward, before missing narrowly.

At intermission the Wreckers talked about the need for stronger voices, and less hesitancy.  The message sank in, as just 1 minute after play resumed Alan Reiter smacked a long free kick off the post.  Brendan Lesch’s follow-up flew wide by inches.

In the 49th minute Lesch won a header.  White settled Lesch’s feed, then laced a cross to Gudis.  Gudis chested it forward, took a touch and poked his shot home for his 2nd tally.

McNair followed with another well-struck direct kick.  Lesch framed the goal; no one touched it, and it sailed in for a well-earned 3-0 lead.

One minute after that Hennessy hit White.  He sent Scott in on goal with a ball over the top.  It did not go in — nor did Lesch’s shot, from Jake Krosse — but in the 59th minute Reiter’s smoothly struck low blast made it 4-zip.

The freshmen edged Fairfield Ludlowe 2-1, in their toughest match of the year.  Matt Liebergall tallied; the Falcons equalized, and then Joe Greenwald got the game-winner, with 1 minute to play.  Coach Chris O’Dell commended Sam Koenig and Dylan Hoy for their strong play.

Mike White (right) and Brendan Lesch react differently to a call (or non-call?) against Fairfield Ludlowe.

James Hickok saves against the Falcons. He's got plenty of defensive cover.

Defender Andrew McNair appears to be heading the ball in the wrong direction. Note that the goalkeeper is Staples' own Michael McCarthy. We're sure, however, that the Staples captain knew what he was doing. (Photo by Lisa Krosse)

2 Responses to Staples vs. Fairfield Ludlowe