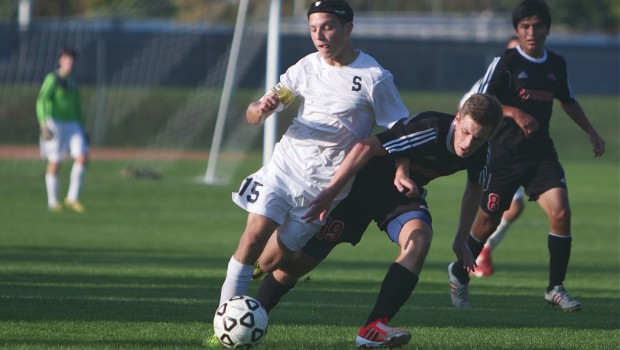 If it weren’t for the autumn leaves, you’d have thought today was early September. The temperature neared 80, and the sun shone on Loeffler Field.

But the Staples boys soccer team is nearing the end of the long FCIAC season. The playoffs loom — and the Wreckers are getting ready.

It took just 3:34 to draw first blood against Fairfield Warde. Center back George Kokkalis came out of a pack to clear a ball beyond midfield. Jack Scott ran on, picked up the ball, then whipsawed his way through 3 defenders. He finished cleanly and low, for Staples’ earliest lead of the season.

Diego Alanis’ curling pass to Joe Pravder in the corner nearly worked. Charlie Leonard found Patrick Beusse with a great look. The Wreckers were dictating the tempo and style of play, and their solid work paid off again in the 21st minute.  Alanis’ free kick was cleared, but Pravder snagged the ball. He took one touch, then laced a gorgeous 35-yard shot into the top corner. It rivaled Scott’s volley against Norwalk for prettiest score of the year.

With Leonard winning balls and propelling his team forward, and Yousef Shahin attacking relentlessly out of the back, the blue-and-whites controlled the offense. Shahin, George Kokkalis, James Lewis and Foster Goldberg nailed down the defense. Behind them, Brenden Price — playing only his 2nd full match since Noah Schwaeber’s concussion — contributed strong saves the few times he was called on.

Kenji Goto came on in back in the 2nd half. The Wreckers almost potted another in the 44th minute, but the ball was headed off the line. Thirteen minutes later, Mustang keeepr Michael Lerman made a fine rebound save.

Two minutes later, though, it was 3-0. Shahin’s inswinger was headed powerfully home by Scott.

With 9 minutes to play and the Wreckers resting most starters, freshman keeper Ziggy Hallgarten came on for his varsity debut. His first save was a well-timed tip over the crossbar.

Warde ruined the clean sheet with 2:52 to go, on a header off a long throw, but Staples got the goal back 1 minute later. Steven Sobel’s long shot appeared headed over the goal line way wide, but Gudis chased it down by the corner flag. He put some good moves on his defender, drove baseline, then delivered a cross back to Sobel. He took one touch, and launched a 25-yard rocket that caromed in off the far post. It equaled Pravder’s earlier strike for prettiest goal of the day — or the year.

“This was a nice one,” said head coach Dan Woog. “We played our game. We were consistent, strong and smart. And we did it without our starting center back (Andrew Puchala, muscle pull) and keeper, and resting Michael Reid for half the match. It was a true team effort — and we really do have a true team.” FINAL SCORE: Staples 4, Fairfield Warde 1. SEASON RECORD: 10-2-2.

QUICK KICKS:  Tied 2-2, the junior varsity scored twice after halftime against Fairfield Warde. The Mustangs hit a late penalty kick, for a 4-3 final. Daniel Brill tallied on a deflection; Denzel Robinson chipped the keeper, after a nice through ball from Ethan Kobak; Jared Vishno finished a nice pass from Grant Sirlin, which began with a great layoff by Robinson, and Kobak scored on a great solo effort. He saved the ball on the end line, then beat the keeper near post. Carl Amacker and Aidan Wisher looked strong defensively…

The freshmen shut out Fairfield Warde 4-0. Sam Kantor headed in Spencer Daniels’ corner kick. Rory Steele hit Daniels with a beautiful cross; he turned, then found Kantor who ran on and drilled a shot into the lower corner. Sebastian Wick’s 1st goal of the year came on a goalmouth scramble, while Luco Cocito raced up the sideline, and nailed a no-angle shot. Teddy Lawrence excelled defensively.