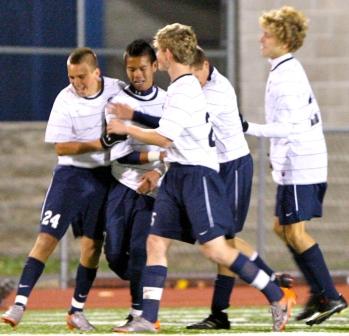 The Staples-Hall rivalry dates back to 1963.  That 1st meeting was in the state finals.  The Wreckers and Warriors tied 0-0, and shared the Connecticut championship.

Tonight the blue-and-whites came out on fire.  The defense they’d been honing all year clicked from the opening whistle.  With keeper James Hickok shouting commands from the back, different players stepped up all over the field, winning balls and denying Hall space to play.

Sean Gallagher did it often against speedy, talented Brandon Thompson.  Frankie Bergonzi and Jake Malowitz did it on the flanks; Court Lake and Steve Denowitz in the middle.

Once they picked off passes, they went forward with speed.  Mikey Scott was a tornado down the left side; Max Hoberman created havoc on the right.  Brendan Lesch and Jake Krosse worked together like pistons.  Lorenz Esposito added more offensive punch.

In the 18th minute, the Wreckers roared out of the back.  Gallagher took a long free kick near midfield.  Denowitz went low, and headed a perfect shot hard into the back of the net.

Mindful that “goals follow goals,’ Staples pressed the attack.  But Hall countered.   Thompson blasted a shot off the crossbar; then Hickok was forced into a tough low save.  At the other end, Steve Smith smacked a ball off the left post.

Switching fields more frequently than they had all year, the Wreckers worked hard for an insurance score.

Less than 2 minutes before halftime, they got it.  Again it started with a win by  Gallagher; this time it created a corner kick.

The short corner was cleared, but Hoberman ran on.  His pass found Lake.  The versatile midfielder/defender/forward beat one man, then ripped a low shot to give his side some breathing room.

The halftime talk focused on the need to keep the pressure on, and put Hall away.  The Warriors are a good side; they showed it in a 4-1 demolition of top-seeded E.O. Smith, and a furious late rally where they tied Cheshire with 17 seconds remaining, then won on a goal in the first minute of overtime.

In the 48th minute Hall keeper Michael Dwyer made a furious save on a hard ball — headed backward by his own defender — but he couldn’t stop the next hard shot.  In fact, very few national team keepers could.

It started with Scott.  He split the seam to Lesch, who stood up his defender, created an inch of space, turned, touched, and — both gracefully and brutally– left-footed a rope into the far right corner.

The West Hartford side pulled within 2 when Eli Shakun converted a ball that had caromed off a defender.  With 23:21 to go, the Warriors were within striking distance.

But 2:12 later, an exquisite series of passes between Steve Smith and Ben Root ended with Lorenz Esposito hammering home from the middle of the box.  The stunning sequence began with Krosse’s back-heel pass.

Ten minutes after that, it was Lesch again.  Taylor McNair sent him through with a nice 1-touch, and the Notre Dame-bound tri-captain calmly chipped the keeper.

Staples was not done.  Three minutes later — in the 72nd minute — Dylan Hoy assisted on Smith’s strike.  The junior midfielder/forward had come close often this year — and earlier tonight.  He was definitely due.

Then it was A.J. Green’s turn.  Set up by sophomore Dylan Hoy, the hard-working redheaded midfielder made the most of his give-and-go opportunity, with a rocket of a shot.

Hall’s Sean Alison got one back, off another rebound, but Alex Tonsberg wasted no time nailing another goal, with another Hoy assist.  That made 8 total in the 2nd half — including 5 for Staples in less than 27 minutes, and 4 in the final 12.

“This was absolutely a team effort,” head coach Dan Woog said.  “And the final score may not show it, but this was as much a defensive win as an offensive one.

“Coaches Kurt Dasbach and Tom Henske have stressed defense all year.  They’ve created a great alignment, given our guys tremendous confidence, and inspired them to play like tigers.  It all came together today — and it all starts with Kurt and Tom.

“Huge props too, of course, to all the guys who made it happen — all over the field.”

The Wreckers move on to the state finals — their 2nd consecutive appearance, and 3rd in the last 5 seasons.  They face Farmington on Saturday (Nov. 21), at 1 p.m. at Waterbury’s Municipal Stadium.

Staples — ranked 5th — will be the home team.  The 6th-seeded northerners advanced to the title match with a come-from-behind 2-1 victory over Bridgeport Central tonight.  Final score:  Staples 8, Hall 2.  Season record:  20-2-1.

Hall was credited with only 3 shots….

A large contingent of Staples spectators was on hand.  The Top of the Hill Team booster club paid for a fan bus.