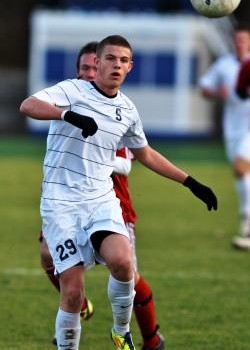 The rivalry has cooled since then.  Entering today’s match, Staples held a 7-3 series lead.  The last time the northerners won was 1984 (2-1).  The last previous meeting was 2006.  The Westporters won that 1st-round match 1-0 — the initial step on their march to the state LL finals.

Though the start of this year’s state tournament was delayed 3 days by weather conditions after the pre-Halloween snowstorm, today’s match had all the feeling of LL tourney matches from the past 52 years.  The weather was cool and very windy, with gusts up to 40 miles an hour.  The trees were bare.  The Hill was empty at the 2 p.m. kickoff — school was still in session — but packed 15 minutes later.

The large crowd was treated to a typical state tournament game:  tense.  The Indians were lower ranked (#22), but they were not about to roll over.

The #11 Wreckers played typically too.  Their defense — keeper James Hickok, backs Taylor McNair, Jake Malowitz, Alex Tonsberg, Ben Root and Harry Birch — were rock-solid.  Their offense featured plenty of possession and tight play.  But — as has happened all year — goals were not easy to come by.

Midway through the 1st half, Tonsberg got banged.  Aaron Liu replaced him, and continued the Wreckers’ lockdown in the back.  When Tonsberg returned, it was in an offensive role.  He provided a spark — but still Staples could not score.

The best chance of the half came with 20 seconds to go.  Malowitz rocketed a long ball off the crossbar.  No one followed — a point head coach Dan Woog hammered home at halftime, with intensity.

But still there were no goals.  Smith missed just wide in the 59th minute, from Max Hoberman; 4 minutes later Tonsberg ripped a shot that was bobbled.

The final 10 minutes of regulation time were action-packed.  Manchester’s best opportunity came with 1:30 to go — but McNair raced across to thwart it.

For the 2nd time in 3 games — the 1st was the FCIAC semifinals — Staples headed to overtime.  There would be 2 10-minute periods; no golden goal.

Birch had a couple of chances in the 1st OT.  Kyle Hoberman’s long throw was tip-saved by keeper  Myles Spencer.  Another great throw led to a corner kick.  There were more challenges — and still no goals.

In the 94th minute — just 7:45 from time — Smith got the ball in the corner by 1st base.  He turned, dealt, possessed, wheeled again, and slotted a ball across the goalmouth.  It was a simple, yet perfect, cross — and Max Hoberman was there, 2 yards from goal, to touch it home.

It was a fitting finish for Hoberman, who trained with focus and intensity yesterday.

The Wreckers were determined not to let Manchester back in the game.  With Ethan Bradeen providing added defense, they kept the Indians at bay.  Staples managed the clock, earning several corner kicks and throw-ins.

When it was over, Woog reiterated his pre-match message:  “This is what state tournament play is all about.  There’s do-or-die pressure.  You win, or you turn in your uniforms.  It doesn’t matter who’s the hero, or where the goal comes from.  Just give it your best, trust in each other, and get it done.”

The 1st big upset of the tournament:  #29 Xavier edged #4 South Windsor 2-1, in overtime.  FCIAC teams that won included Greenwich (2-1 over Hamden), and Westhill (3-0 over Bristol Central).  Danbury fell 2-1 to Guilford, in overtime.

Steve Smith, in control against Manchester. (Photo by Carl McNair)