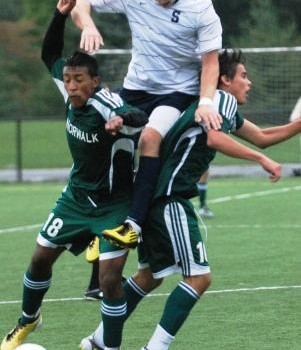 For the 1st time since the 1st year of the Staples varsity soccer program — 1958, when what is now known as Loeffler Field was not ready — the boys soccer team played a home game away from The Hill.

With the grass field unplayable after a day of torrential rain, the Wreckers took on undefeated, #1-in-Connecticut Norwalk at the Wakeman turf field just north of Bedford Middle School.  The atmosphere was not as intimate as Loeffler Field, but both teams knew the stakes were as high as in any recent Staples-Norwalk encounter.

On the calmest day, Wakeman is the windiest spot in Westport.  Today there were gusts up to 50 mph.  Intermittent rain added to the fun.

The Bears won the toss, and took the wind.  They moved the ball well, as expected, darting out of the back for counters.  Led by Jake Zuniga and Andres Torres — swift, talented players the Wreckers have battled seemingly for years — they have a well-deserved reputation as a torrid, high-scoring side.

Root got off the 1st good shot of the game, cracking a ball following good combination play with Greg Gudis and Mikey Scott.  Those 2 were keys at the center of the field, along with Lars Aanestad, Jake Krosse and, later, Steve Smith and Max Hoberman.

Root was not the only Wrecker making his 1st-ever start.  Sophomore Lorenz Esposito provided a spark too.

Though Norwalk had several challenging forays, Staples dictated some of the tempo.  When the 1st half ended 0-0, they knew they’d played their best soccer of the year.

Coaches Dan Woog and Kurt Dasbach urged their side not to change things now that the wind was at their back.  Some of Norwalk’s balls had carried too far.  Keep things low, the coaches said.  Keep doing what you’ve done.

Just 2:40 into the 2nd half, things did change.  Mikey Scott — aided by towels to wipe off the ball — launched a long throw.  Hoberman pounced on a loose ball as it skittered into the box, and powered a shot home.

With Lesch taking charge in the back, Root gaining confidence and Gudis commanding midfield, the Wreckers pushed forward.  Rockets by Root and Gudis nearly found their mark.

Norwalk slipped through dangerously once.  Malowitz cleared the ball off the goal line, and Staples again pressed.

Sophomore James Hickok — the oldest keeper on the field, as his Bear counterpart Svet Kozak is only a freshman — came up huge on a high ball, earning a chant from the crowd.

As the minutes ticked past, Staples managed the game well.  They could not let up for a second — Norwalk could pounce at any time — and they did not.  When the final horn blew, they celebrated with the small but delighted crowd.

And they knew they would likely see Norwalk at least once more in this long, strange, and suddenly very exciting season.  Final score:  Staples 1, Norwalk 0.  Season record:  4-2-0.

QUICK KICKS: The Wreckers have little rest.  On Monday they’re at Danbury — and the Hatters are coming off a big 2-1 victory over Ridgefield.  Then, in quick succession, come Harding (Wednesday, home) and Westhill (Friday, away).

It may not look like it, but Brendan Lesch may have ended up with the ball. (Photo by Lisa Krosse)

3 Responses to Staples vs. Norwalk