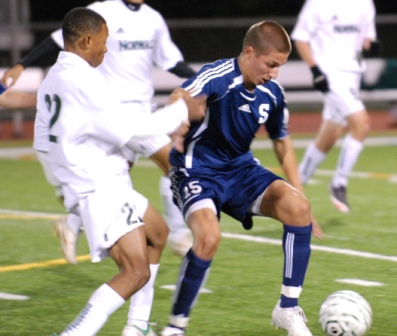 Since last year — when Norwalk handed Staples its only regular season loss (1-0), and the Wreckers then beat the Bears in the FCIAC semifinals (3-0) — both teams have eagerly awaited tonight’s matchup.   Norwalk is quick, technically stellar, tactically inspired, and physically tough — and Staples is too.  Both sides blend youth and experience.

The only anomaly, in fact, was the hosts’ 3-1-2 record.  A couple of early season stumbles cost them, but they are clearly among the league’s elite.

Testa Field pulsed with a post-season fervor.  The neighboring schools’ fans turned out in equal measure, and there were plenty of alumni and college coaches in the stands too.

Norwalk had the run of play for much of the 1st half, thanks to midfield control.  They could not penetrate, however, thanks to defenders Mikey Fitzgerald, Frankie Bergonzi, Sean Gallagher and Jack Hennessy — and behind them Michael McCarthy.  The keeper was called on in the 34th minute, and came up big.

The Wreckers had chances of their own — particularly in the 13th minute, when Brendan Lesch drew keeper Alex Hurd out — and the 38th minute, when Hurd made a fine stop on a corner kick.

Three minutes into the 2nd half, Matteo Marzoli’s corner kick caused chaos in the box.  Norwalk’s clearance attempt came right to Fitzgerald.  The defender — who moves up often — stubbed it in through a crowd, and the Staples crowd went wild.

A minute later, though, Norwalk equalized.  The dynamic duo of Willy Arbieto and Andres Torres — the junior who, last year as a sophomore, bedeviled Staples — combined, and this time it was the Bear faithful who went wild.

After such a turnaround, some teams would have let the momentum get away from them.  But those teams are not Staples.

Reiter then nearly connected on a free kick.  The Wreckers kept attacking, but Norwalk countered often and well enough to keep them honest.

In the 73rd minute, Scott’s corner caused more chaos.  This time, though, a foul in the box was called.  Reiter calmly stepped forward to take Staples’ 1st penalty kick of the year.

His strike was true.  The Wreckers once again held the lead.

This time they did not surrender it.  The Bears moved more men forward in the final 7 minutes, but Staples stood fast.  It was a nail-biting end to a regular season game that had all the trappings of an FCIAC title contest.

“We needed a game like this,” said head coach Dan Woog.  “We had to be tested by an excellent team.   We had to fight for 80 minutes.  We had to play a night game, in a loud stadium, in this atmosphere.  There will be more games like that this year, and we have to be ready for them.

“We’ll see Norwalk again,” he said.  “Maybe more than once.  If the other matches are like this, the fans will definitely get their money’s worth.”  Final score:  Staples 2, Norwalk 1.  Season record:  8-0-0.

The junior varsity won a tough match, 3-2 in the waning minutes.  Two minutes in, Steve Smith bent a great free kick around the wall.  But Norwalk went up 2-1 by halftime.  Coach Ross McGibney put Ben Root on the sweeper — and seconds later he rifled in the tying tally.  Terence Gibbons got the game-winner, very late in the exciting match….

The freshmen edged Norwalk 2-0, in one of their toughest contests.  Dylan Hoy scored off a corner kick, and Zach Morrison finished a breakaway.  Coach Chris O’Dell lauded Jon Denowitz and Harry Birch for their fine play.

Jack Hennessy turns the corner at Norwalk. The sweeper makes dangerous runs out of the back. (Photo by Carl McNair)

It wasn't a post-season whiteout — but the Wrecker fans were out in force tonight at Testa Field in Norwalk. (Photo by Carl McNair)

8 Responses to Staples vs. Norwalk