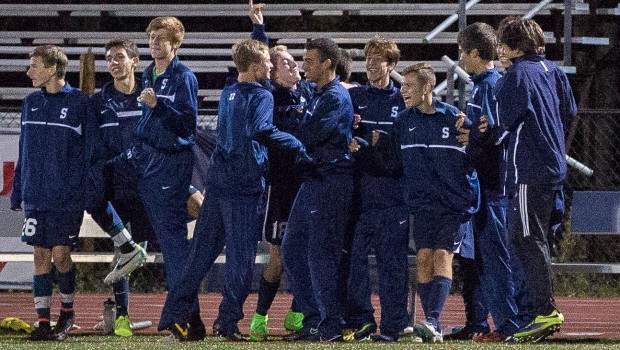 Kurt Dasbach led an excellent training session yesterday on how to beat defending state champion Ridgefield’s stepping-the-line defense. But it was the hosts’ offense that was on display in the first 25 minutes at Tiger Hollow. They blitzed the Wreckers for 3 goals, building a seemingly insurmountable lead.

Andrew Puchala nicked one back 8 minutes before halftime. The center back — hobbled by a tendon injury earlier this year — raced forward on a corner kick by Graham Gudis, and headed home Sebastian Wick’s flick.

The goal sparked Staples –a bit. But it was a shell-shocked Westport side that gathered for halftime. Goalkeeper coach Tom Henske ripped into them, hard. Head coach Dan Woog told them that if Ridgefield could score 3 goals, Staples could too. He did not say that no Wrecker team had ever done it, in the program’s 56-year history.

Inspired by Henske’s wrath, and the coaches’ decision to go for the win — pushing an extra man forward yet gambling by sacrificing one in back — the blue-and-whites were a different team in the 2nd half.

Just 1:46 after intermission, Puchala nailed his 2nd header — this one off another Gudis corner kick. (The Wreckers have worked on set plays in training, too.)

That kicked their game up yet another notch. Puchala, Josh Berman, Kenji Goto, Gabe Pensak and Jack Zeldes were stalwarts on defense. Gudis, Patrick Beusse and Michael Reid masterminded midfield. Wick, Nate Argosh, Daniel Perez Elorza and Daniel Brill applied intense pressure up top. Unlike the 1st half, there were passes to feet, great layoffs, and strong switches of fields.

Seven minutes later, Staples struck again. They earned a long throw deep in Tiger territory. Pensak’s long one bounced around; finally Argosh poked it into the corner. The Wreckers had drawn level — and 29 minutes still remained.

Twelve minutes after that, Gudis launched a free kick. Brill banged a shot off the post — and Puchala was, unbelievably, there to nail it in.

The final 16 minutes were insane. Staples went for the kill — but never let up defensively, either. Ridgefield, rocked on their heels, threw everything forward. The Wreckers had already lost Zeldes to an apparent concussion, on a jarring collison, and a couple of his teammates were not at full strength. But no one let up. And the Wrecker bench was on their feet, screaming and urging their teammates on.

Staples managed the clock well in the waning minutes. When the final horn sounded, history had been made. The Wreckers had climbed out of the abyss, turning a 3-0 deficit into a heart-stopping, head-banging 4-3 win.

They can’t celebrate long, however. In just 24 hours — at 7:15 p.m. tomorrow (Tuesday) — they face undefeated Norwalk, away.

That — tonight’s game, and tomorrow’s — is what Staples soccer is all about. FINAL SCORE: Staples 4, Ridgefield 3. SEASON RECORD: 3-1-1.

QUICK KICKS: The junior varsity drew 2-2 at Ridgefield. Matteo Broccolo scored early on a header, from Rory Steele’s cross. Broccolo scored again in the 2nd half, on a layoff from Kason Kreiss off a Griffin O’Neill cross. Keeper Brenden Price played excellently in the 1st half. The Tigers drew level in the 2nd half on balls over the top. Sam Kantor controlled the game well, and Jerrett Rende had a fine match defensively….

The freshmen shut out Ridgefield, 5-0. Matt Engler scored first, then Tyler Wright. Will Birch and Chris Andrews finished off the first half scoring with a nice, one-time upper 90 shot. Timmy Liles tallied in the 2nd half. Chris Martenson dominated the field, while Birch did well working the Ridgefield defense. Daniel Brill looked strong at midfield and up top in Ridgefield. (Photo/Kim Lake) The Staples bench was totally into the Wreckers’ great comeback in Ridgefield.