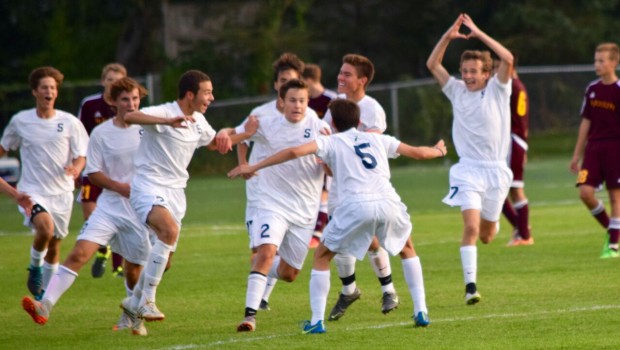 After a sub-par performance against Greenwich Tuesday — in which Staples needed a goal with 2:14 remaining to scrounge a 1-1 draw — the Wreckers knew they had to come out firing today against St. Joseph.

The Cadets pounced early. Freshman Sawyer Meehan scored just 2:26 in. It was a soft goal, off defensive miscues — and it was St. Joseph’s 1st tally, after 4 straight shutouts. They opened the season with a well-played 2-2 draw with Greenwich, then dropped consecutive contests to some formidable foes: Trumbull, Fairfield Ludlowe, Wilton and Danbury. That’s an exceptionally tough start to the season.

The hosts continued their lackluster play through much of the 1st half. The 2nd half was somewhat better. But for 33 minutes senior keeper (and co-captain) Joseph Lucy denied every opportunity, with saves ranging from excellent (on difficult shots) to easy (on poorly struck balls).

After a series of corner kicks — Staples had 10 on the day, to the Cadets’ 1 — the visitors fouled at the top of the box, dead on. Graham Gudis conferred with Aidan Wisher. St. Joe’s expected a trick play. Instead, Gudis calmly laced the ball over the wall, into the back of the net.

The Wrecker coaches and bench urged the team to go for the win. Heeding keeper coach Tom Henske’s mantra — “Goals follow goals!” — Staples pressed the attack. They earned another corner. Daniel Perez Elorza lofted it into the box. It bounced off several bodies, including Lucy’s back, before caroming in for an own goal.

Now the blue-and-whites went for the kill. With 3:21 to play — 54 seconds after the 2nd score — Gudis scored on a back-to-the-goal, across-the-body long-range shot that bounced off 2 posts before settling it. It was reminiscent of his brother Greg’s strike against Glastonbury in the 2009 state semifinals, though from a very different spot on the field.

The 3-goals-in-4:18 span — all within the final 7:39 of the match — gave the Westporters a hard-earned and very important victory. But, head coach Dan Woog noted, “We’re living life on the edge. We’re getting points, but not playing well. We’re not executing our game plans. The results are nice, but they way we’re doing it is not.”

However, he added, “We have faith our guys will bring their A-game. We’re hoping it’s sooner rather than later.”

Woog noted that the Wreckers face a challenging week ahead: 3 games in 5 days. As of next Friday, the regular season will be half over. FINAL SCORE: Staples 3, St. Joseph 1. SEASON RECORD: 3-1-1. Grant Sirlin takes on a pair of Cadets. (Photo/MaryGrace Gudis)