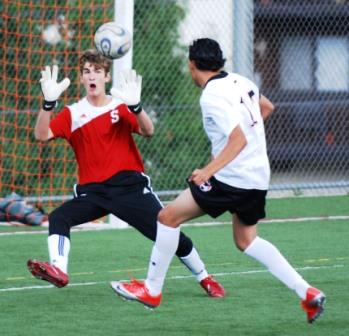 For years, Stamford High School’s soccer field has been a tough place for Staples to play.  Though it now sports nice turf, it’s still short and narrow, and with hard-to-see goalposts, shooting is difficult.  The Wreckers handled the Black Knights 6-0 last year — on the Saturday of Staples’ 50th celebration — but Stamford has had a much better run this year.  They boast a win and a tie over Trumbull and Greenwich, respectively, and lost to resurgent Central 5-3 after storming to a 3-goal lead.

Sure enough, the hosts became the 1st team to take a lead against the Wreckers this year.  It happened just 10 minutes in, when Clifford Lyle snuck inside to convert JP Dominguez’s free kick.

The Westporters had chances in the 1st half — the best was when sweeper Jack Hennessy raced upfield and cut toward goal, only to be whistled for what seemed to be offside on his dribble (the official later said Brendan Lesch set an illegal pick on the play) — but their voices were silent, their midfield defense lacking, their passing off.

The half ended Stamford 1, Staples 0.  Players and fans remembered last year’s FCIAC finals, when Greenwich held a similar lead (Staples won 3-1).  But the Wreckers had played a much better half in that match, and with far greater urgency.

Two things in Staples’ favor:  They knew they could play stronger, more creative soccer than they’d shown.  And they knew the Knights had failed to hold previous leads, against other teams.

The 2nd half was nothing like the 1st.  Twelve minutes in, Sean Gallagher picked up a short free kick.  He took a few touches up the right side, then laced an across-the-grain cross.  Mikey Fitzgerald — the team’s go-to header — met the ball squarely with his curly hair, and suddenly the Wreckers had equalized.

Within a minute, Mike White’s header led to a near-miss by Lesch; then keeper Yeison Llanos saved a solid Andrew McNair rip.  A minute later, a Knight defender cleared a near-certain goal off the line.

The blue-and-whites kept pounding.  In the 59th minute McNair found White.  The fleet forward tore into the red zone — the corner — and cut the ball back, delivering a wicked ball through the penalty area.  Lesch met it solidly, heel-flicking it home for a 2-1 edge.

Less than a minute later, Lesch took Greg Gudis’s feed and blasted a shot off the crossbar.  It caromed back to Alan Reiter’s foot.  The central midfielder wasted no time, slamming the rebound into the back of the net.

Staples dominated from then to the end.  They finished with a 23-5 advantage in shots and a 7-1 lead in corner kicks — statistics that proved high school soccer is not a 40-minute game, but an 80-minute affair.  FINAL SCORE:  Staples 3, Stamford 1.  Season record:  7-0-0.

QUICK KICKS: The win qualifies Staples for the state tournament — for the 50th time in 51 years…. Michael McCarthy is all concentration as he catches cleanly. (Photo by Lisa Krosse) Greg Gudis is all concentration, as he sets up a shot in Stamford. (Photo by Lisa Krosse) Mike White shakes off pursuit by a Stamford defender. (Photo by Lisa Krosse) Nothing can stop Alan Reiter — nothing at all. (Photo by Lisa Krosse)

6 Responses to Staples vs. Stamford