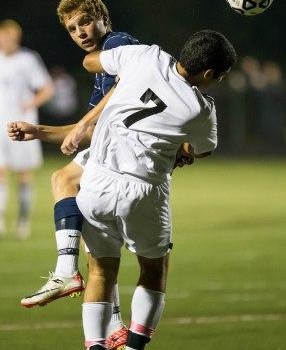 Tonight’s rematch of last year’s FCIAC final featured 2 teams that have had a tough time finding a rhythm — and goals — this year. Staples entered the match 3-3-0; the host Golden Eagles were 3-3-2.

The Wreckers began at a torrid pace. They pressed hard, moved up out of the back, and won the majority of 50-50 balls.

Jack Scott attacked from the back; Jordan McNair worked the left side, and in the 11th minute Andrew Travers went in on keeper Nick Weinstein.

Travers got loose a couple of more times too in the 1st half, but did not score.

With Greg Shikowitz playing another tough-as-nails game, and Andrew Puchala behind him, the defense was hard to beat.

The blue-and-whites’ best chance came in the 34th minute. Puchala’s header off Scott’s corner kick clanged off the post. Trumbull countered, but Shikowitz was there to save that threat.

But despite the Wreckers’ control — of both territory and time on the ball — they had few telling chances. Trumbull’s best opportunity came with 3:30 to go, but it was blasted high.

Ethan Bradeen got a shot off with 1 minute to play, but the match ended as it began: scoreless.

“It’s tough,” admitted Staples head coach Dan Woog. “We’re getting better match by match — defensively, and with our combination play — but we’ve got no goals in 2 games to show for it. We haven’t been able to put anyone away.”

He told his team, “It’s a long season. Don’t get frustrated. Keep playing the ball on the ground. Keep going forward. Keep pressuring. It will pay off.” Final score: Staples 0, Trumbull 0. Season record: 3-3-1.

The junior varsity shut out Trumbull 1-0, on a Foster Goldberg strike….

The freshmen also won by shutout over Trumbull, 2-0. Daniel Perez-Elorza played an outstanding game, and scored on a side volley upper 90.  Chase Gornbein  tallied on a rip from 30 yards out. James Lewis and Kenji Goto were solid too. Noah Schwaeber looked sharp in goal, while Graham Gudis filled in nicely on defense for the injured Jack Zeldes.

Greg Shikowitz, with a patented tackle on Zach Chase. (Photo by Carl McNair)

Some of the Staples Superfans, who traveled to Trumbull. (Photo by Carl McNair)