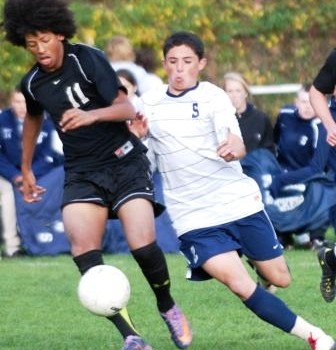 This year’s 1st “season” was really 2 separate ones.  After a gruesome 1-2 start, the Wreckers regrouped.  Then they caught fire.  They went 13-0-1, finishing 2nd in the league standings and drawing Trumbull for the FCIAC quarterfinal.

After a bad 3-1 loss to the Golden Eagles in game 2 of the fall schedule, head coach Dan Woog looked ahead.  “We’ll see them again,” he said.  “And we’ll be a different team.”

The Westporters are a different team now.  But Trumbull always brings their A game.  They’ve got Staples’ number.  Since a 2-0 victory in 2003, the Wreckers have gone 0-3-3 against them.

Frankie Bergonzi’s 1st-minute header — followed by a James Hickok save, and subsequent corner kick — set the tone for the 1st half.  It seesawed back and forth.

Brendan Lesch, Court Lake, Greg Gudis, Jake Krosse, Lorenz Esposito Steve Smith and Max Hoberman moved the ball well — with Bergonzi coming out of the back — while Bergonzi, Steven Denowitz, Jake Malowitz and Sean Gallagher played tight defense under more pressure than they’ve seen most of the year.  Gallagher’s 27th-minute tackle, in particular, was the stuff of highlight reels.

The 2nd half — into the wind — proved challenging for Staples. They tried to adapt by playing more on the ground, and varied their set pieces.  Gudis’s 53rd-minute free kick was bobbled by the keeper, but no one finished.

At the other end of the field, Gallagher cleared a near-goal off the line.

Regulation time wound down.  Taylor McNair’s 76th minute header was indicative of the game:  close, but not close enough.

With 2:15 remaining, Trumbull’s Keith Bond broke free at the top of the box.  He rifled a shot into the far right corner — and out of nowhere, Hickok leaped, grabbed the ball, and landed on it.  It was a textbook save for the sophomore — and possibly a season-saving one as well.

But Trumbull was just as tenacious.  In the 86th minute Hickok saved high.  His outlet initiated a great run forward — yet still no score.

Two minutes into the 2nd OT, Gudis had the ball at midfield.  He juked 2 players, then a 3rd, but was forced to the outside.

He found his way through the area, and drove endline.  Almost out of bounds, he slammed a shoulder-high ball across the box.

Lesch was waiting.  Twisting his body, he redirected a header past everyone.  It was a stunning goal, from start to finish.

But Trumbull refused to quit.  With 2 minutes to go Hickok leaped high for a driven ball.  Jostled hard by at least 2 players, he once again came up huge.

The Wreckers managed the clock after that.  It was a satisfying end to an electrifying goal, and an edifying match.

“We needed a game like this,” said Dan Woog.  “Not just to win and move on to the semis, but to test ourselves against an excellent team, in a pressure situation.

“Every match from here on could be like this.  It’s win or go home.  There will be tense moments, but from now on when we’re in tough situations we’ll say, ‘Remember Trumbull.  Remember how we dug down, and gutted it out.  Remember what we need to do.’

QUICK KICKS: Staples’ FCIAC semifinal opponent is Wilton.  The #6 Warriors upset #3 Greenwich 1-0, in their 1st league tournament appearance in 10 years.  The semi is set for Monday, Nov. 1 at Fairfield Ludlowe High School (tentatively 5 p.m.).  The match will be streamed live over WWPT-FM 903 (click here to listen)…

In other quarterfinal action, #4 Fairfield Warde edged #5 Ridgefield 1-0, in overtime.  Top-seeded Norwalk and #8 New Canaan battled to a 2-2 regulation tie, and 3-3 in overtime, before the Rams pulled out an upset PK win.

This was Staples’ 1st overtime game since their penalty kick win over Newtown, in last year’s state tournament 2nd round.  It was the Wreckers’ 1st win during overtime since the 2006 FCIAC semifinals (1-0 against Greenwich)…

Court Lake rounds the corner against Chris Neil. Court had one of his best games in a Staples uniform against Trumbull. (Photo by Lisa Krosse)

The night before the FCIAC tournament, several Wreckers got Mohawks. Brendan Lesch did the honors on Frankie Bergonzi.

One Response to Staples vs. Trumbull (FCIAC quarterfinal)