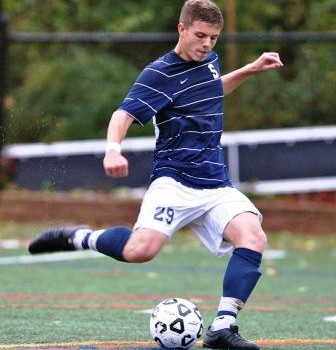 The 6-5-2 record Westhill brought into today’s match was deceiving.  Those losses included 3  games they won on the field, but forfeited due to an ineligible player.  Among them:  a 7-1 demolition of Darien.

The hosts proved they were real just 36 seconds after the opening whistle.  David Quito raced forward, stunning Staples with perhaps the quickest goal ever scored against them in their history.

After a few Wrecker forays upfield, Westhill struck again.  This goal — at the 9:00 mark — came after a giveaway deep in Staples’ end.

Max Hoberman had a couple of shots, and Joe Greenwald headed well off a corner kick, but most of the half belonged to the Vikings.

The 2nd half was a bit better for the guests.  Dylan Evans challenged on Alex Tonsberg’s free kick; Hoberman again worked hard on the flank.  The Wreckers were winning more 50-50 balls, and going forward with speed and power.

But in the 56th minute Quito scored again, against the run of play off a lightning-fast transition.

Staples kept pressing, but they were no match for the Vikes.  A Kyle Hoberman blast off the crossbar was the Wreckers’ best shot, very late in the match.

“Westhill is fighting for a playoff spot — and boy, did they fight hard,” said Staples head coach Dan Woog.

“They’re excellent on the ball, quick, smart and strong.  It would be a real shame if they don’t get a chance to play in the post-season.”  Final score:  Westhill 3, Staples 0.  Season record:  8-2-3.

QUICK KICKS:  Though the weather forecasters predicted a nor’easter, no rain fell during the game….

The freshmen were in charge all the way, en route to a 3-o shutout of Darien.  Nate Argosh, Oliver Hickson and Michael Reid all scored, the latter on a great long shot.  Jordan McNair distributed masterfully, and Luke Fonteyne got the shutout in goal.

2 Responses to Staples vs. Westhill