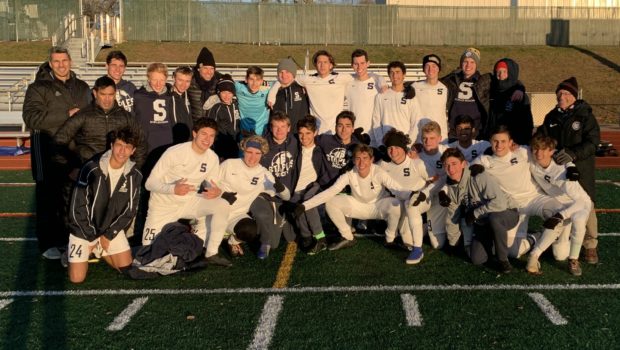 The odds seemed stacked against Staples.

By beating #16 Wilbur Cross 3-0 on Monday, the Wreckers earned the right to meet the #1 seed today.

For over a decade, Glastonbury has set the standard for Connecticut high school soccer. The Tomahawks won the last 2 state LL (extra large schools) championships — decisively. They’ve also captured 5 of the last 6.

They are strong, athletic, skillful, fast and well-coached. They showed their stuff all season long, rolling to a 14-1-1 record before eliminating Darien 4-0 in the first round of states.

Staples got a glimpse of Glastonbury in a preseason scrimmage. After a relatively even first half, the upstaters pulled away for a dominating 5-0 victory.

On top of all that, the Wreckers were missing their starting goalkeeper. Reed Caney — who recorded 8 shutouts in Staples’ 10-5-4 season — was shown a red card in the first half of Staples’ 1st-round state tournament win over Wilbur Cross, for handling the ball outside the penalty area to prevent a clear goal-scoring opportunity. Backup keeper Sebi Montoulieu finished that game witih a clean sheet, and got the call today. He’s experienced and strong — but had played only 30 varsity minutes before kickoff.

Today’s match was played at the Tomahawks’ home field. Their fans are many, and loud. The temperature at game time was 29 degrees. A strong wind blew.

Yesterday, the coaching staff gave the Wreckers 2 game plans: bunker in and hope for a lucky goal and/or penalty kicks, or press hard offensively. Both strategies had upsides and risks. The players debated both strategies. In the end, they chose to press. But, the coaches warned them, they had to do it well. And hard.  And do it for 80 minutes.

At the outset, it looked like the wrong choice. Glastonbury’s ace, Alec Hughes, struck twice, in the first 14 minutes. With 66 minutes remaining, the score 2-0 and the hosts surging, disaster loomed.

But the Wreckers righted themselves. They did not give up, or let up. They reorganized, kept the ball on the turf, continued to press, and did what they could to get back in the game.

Three minutes before halftime, Patricio Perez Elorza found Alan Fiore with a great pass, on the left side. The junior cut in, and fired. It looked like a good shot, not great. But it carried far and hard, beating the keeper low and inside the far post.

Glastonbury had not been scored on in the state tournament since 2017.

Suddenly, Staples went into intermission down not by 2 goals, but only one.

And they went into the locker room with confidence.

The coaches made one or two tweaks — including asking Benny Feuer to assume man-marking responsibilities. They urged their side to get the next goal — and then go for the jugular.

Perez Elorza had a great early opportunity. Birns had an excellent chance too.

But Glastonbury had at least as many looks at the opposite end. Montoulieu came up huge several times, saving balls and also cutting down angles to prevent more dangerous shots.

Like the experienced team they are, the Tomahawks pulled control of the match back. From the 60th to 70th minutes, they had several opportunities for an insurance goal. Montoulieu saves some; others were just wide or high.

Still, Staples battled. With 10 minutes to play, they turned up the pressure.

In the 73rd minute, Emerson Anvari got the ball. A senior who knows well when to hold on and when to lay off, he did the first, then the second. He played the ball forward to Lars Djuve. The senior turned, kept the ball despite contact with a defender, and poked it in from close range. Just like that — with 6:55 to play — the Wreckers had drawn even.

They went for the jugular. Birns took 3 defenders on, then left-footed a gorgeous shot just beyond the keeper’s outstretched hands. Now — after another wild celebration — it was 3-2, Staples. Just 3:41 was left in the game.

Glastonbury was not about to surrender. The Tomahawks fought fiercely. They earned two corner kicks. Both were dangerous.

But Staples’ defense — Feuer, Carter Bassler, Brendan Lynch and Surya Balaji — held firm. They won tackles. They played smartly out of the back. They made sure to use the far corners of the field.

The final horn sounded. The raucous hometown fans were silent. They watched as the Wrecker bench stormed the field. Staples had followed the game plan they agreed on. They’d done what they had to — even when it looked like they could not.

It was one of the biggest upsets in Staples soccer history. It was also one of the greatest comebacks.

It was also only the 2nd round of the state tournament. The quarterfinals loom on Friday.

This time, the opponent is familiar: Trumbull.

The Eagles and Wreckers have quite a history. In the regular season, Staples stormed back from a 2-0 deficit to tie 2-2. Last week, Trumbull eliminated Staples in the FCIAC semifinals, 4-1 (and then defeated Fairfield Warde 1-0, in the finals) Trumbull advanced to the state quarterfinals with a 3-0 win over Amity-Woodbridge, and a 6-1 victory over Shelton. Game time at Trumbull has not yet been announced.

Woog repeated his team’s mantra: “We will play any team, any time, anywhere.”

It served them well at Glastonbury. Now the battle continues to see who will replace the Tomahawks as LL state champs. FINAL SCORE: Staples 3, Glastonbury 2. SEASON RECORD: 11-5-4.

Today was the 11th time Staples and Glastonbury have met in the state tournament. The first time was way back in 1959, a 1-0 loss. The most recent was 2009. The Wreckers took that game 3-2, a wild, back-and-forth affair — and went on to win the state championship. Overall, the Tomahawks lead the series, 6-5. Staples team and coaches, after the Glastonbury win. (Photo/Patrick Ostbye)