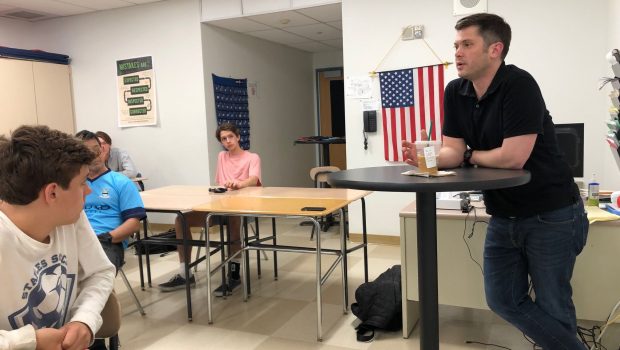 This afternoon, Ted Gallant ’98 spoke to the rising seniors, junior and sophomore returnees.

The 1997 captain spoke powerfully, directly and honestly about his high school experiences, and life beyond. He described the highs of reaching the state finals as a junior, and the roadblocks his team faced the next year. He noted how much he’d gotten out of the Staples soccer experience — and how much more he could have gotten, had he reached out to alumni and other resources.

Ted talked about his various majors at the University of Colorado; his difficulty landing a first job; his work ethic and industriousness, which helped create opportunities for himself once his foot was in the door, and his path to the presidency of a company that delivers counseling services to aid workers in some of the world’s most treacherous spots, like Sudan, Iraq and Afghanistan.

The current players had plenty of questions. Ted answered them all forthrightly, and with a bit of humor.

His final message: Enjoy every minute of your Staples soccer experience. Take advantage of the vast alumni network. And you never know where life will lead you, so be ready to seize every opportunity. Ted Gallant talks to the Wreckers.