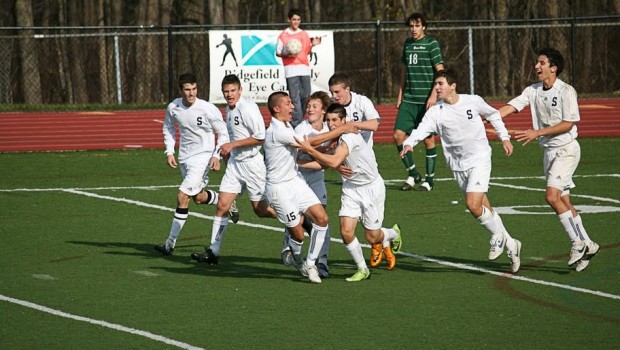 That’s when the Staples Wreckers begin their defense of the state and FCIAC championships.  The site is Fairfield Warde; game time is 4 p.m.

The FCIAC schedule is completely revamped this year.  For the 1st time ever, Staples will not play 3 traditional rivals:  Wilton, New Canaan and Darien.  There are 19 league teams; to accommodate an 8-team FCIAC tournament, and the state-mandated starting and stopping dates (along with strict rules about numbers of games per week), there can be only 15 league matches.

“It will be strange not playing those 3 teams,” admits head coach Dan Woog.  “Interestingly, Trinity Catholic is back in the rotation.  Next year’s seniors — even those who have been on varsity for 3 years already — have never played them.”

Next fall will also mark the 1st time in many years that the Wreckers will face all 3 Bridgeport schools.

Brookfield will once again be Staples’ 16th game.  In just 2 years, this has developed into one of the best rivalries in the state.  The teams split their previous encounters, with the upstaters handing the Wreckers a solid 3-1 defeat last fall.  The Bobcats went on to win the state “L” crown.

Quiz Night is scheduled for Friday, Oct. 15 — the night before Brookfield comes to town.

There will be 9 home matches at Albie Loeffler Field, and 7 away.

The Wreckers will follow their traditional pre-season scrimmage.  Tryouts begin on Saturday, August 28; 4 days later they face an FCIAC foe absent during the regular season (Wilton, away, Sept. 1 4 p.m.).

Wethersfield comes to town on Friday, Sept. 4.  A match at Glastonbury — last year’s semifinal foe — is set for Tuesday, Sept. 7 (Naugatuck will be there too), followed by the annual Wethersfield Jamboree on Saturday, Sept. 11.