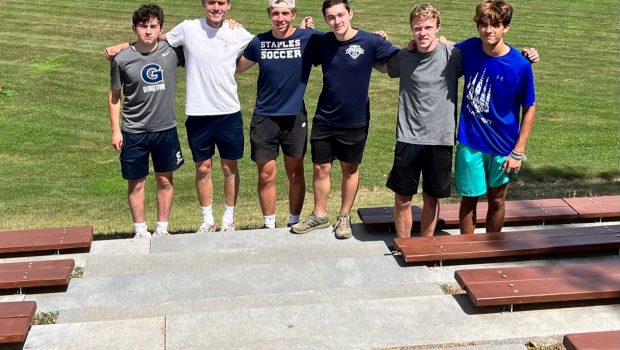 Every August for nearly 2 decades — ever since The Hill was terraced in 2006 — Staples boys soccer parents have sanded and oiled the benches.

But the wood showed its age. Planks had split and peeled.

So co-captain Ben Douglas and the Wreckers swung into action.

Following in the footsteps of ’21 captain Jackson Hochhauser — who, like  Douglas, wore the prestigious #15 jersey, and who led last year’s project to turn the equipment shed into a locker room — Douglas organized the effort.

“Alex (co-captain Laskin) and I want the stands full this year,” the senior defender says. “This project gave us a chance to work together as teammates, give back to the program, and bond.”

They learned a lot along the way: “planning, sawing, ‘measuring twice,’ sanding, painting and installing.”

Douglas thanked parents who helped, along with nearly 20 players who worked in shifts.

The project was finished this week. The benches are ready for the Wreckers’ home opener: Saturday, September 10 (10 a.m., vs. New Canaan).