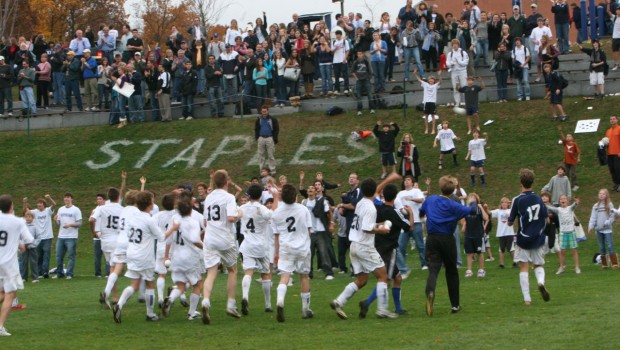 The 2009 FCIAC schedule is finalized — and the Wreckers will give new definition to the phrase “road warriors.”

With few regular season matches scheduled for Loeffler Field in 2009, every home match will be a happening.

Many of the games are to the furthest reaches of the league, including Danbury, Ridgefield and Greenwich.  The Brookfield non-league contest (exact date to be determined) will also be on the road.

“This is definitely the most brutal schedule I’ve seen at Staples,” head coach Dan Woog said.  “It will really test our team — physically, mentally, even nutritionally.  I’m not just saying it to keep our guys on their toes — I mean it.  We will have to be focused, and on the top of our game, from day one. “

Even the pre-season is tough.  There are matches with Trumbull and Wethersfield; a jamboree at Glastonbury with the Tomahawks — who eliminated the Wreckers in the final minutes of last fall’s state “LL” semifinal match — plus Guilford and Naugatuck, and the traditional four-team jamboree at Wethersfield.

The reason Staples faces Trumbull in pre-season is that, for the 2nd year in a row, the 2 teams do not meet during the regular season.  For the 1st time ever, this year’s schedule mirrors the previous season’s (with home and away sites reversed).  That means Staples again misses Trumbull, Bassick and Trinity Catholic.

This is the 3rd straight season the Wreckers and Trinity do not play — so even 3-year seniors will never face the Crusaders.

The season begins with a home match Tuesday, Sept. 15 against Westhill.

To see the complete varsity, junior varsity and freshman schedules for 2009, click “This Season” at the top of the StaplesSoccer.com home page.