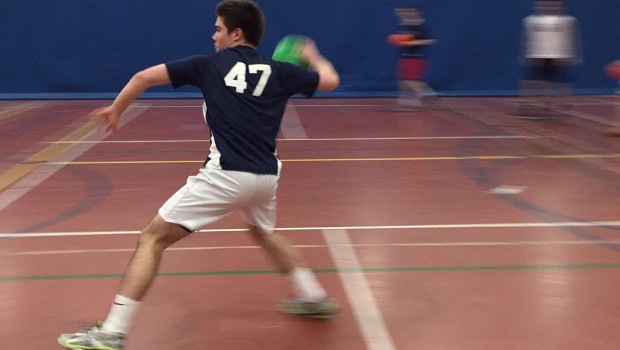 Josh Berman was on all 5 winnning teams, in this afternoon’s dodgeball tournament. The games — the 3rd in this year’s Jack Scott Octathlon of  Champions — featured different teams each round. Organizer Daniel Perez Elorza broke them down by various criteria: defenders vs. attackers; players who were on varsity as sophomores vs. those who were not, etc. The final match involved kicking only — no throwing.

Berman’s 48 total points were the most for the day. That vaults him into 4th place overall. Brenden Price edged into a 1st-place tie with Graham Gudis (87 points each), while Jack Zeldes is 3rd (83). Kenji Goto goes for the kill in the dodgeball Octathlon.