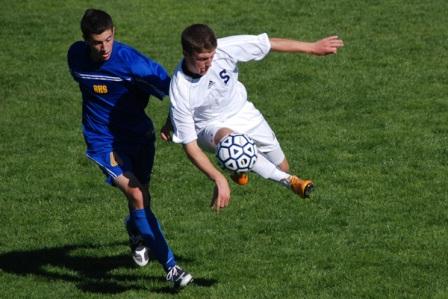 Brendan Lesch is headed to the Big East.

Brendan Lesch brings his exciting style of play to Notre Dame in 2011.

The All-New England selection and 2010 tri-captain has committed verbally to the University of Notre Dame.  Lesch — highly recruited by some of the top soccer schools in the country — made his decision based on many factors, including academics; campus environment; the soccer program’s competitive schedule, facilities and team atmosphere — and the chance to play for Bobby Clark, one of the most highly regarded coaches in the soccer world.

“Brendan made a great choice,” said Staples head coach Dan Woog, noting the rarity of any high school soccer player knowing where he will go to college midway through junior year.  “Notre Dame is a wonderful school, and they play in a great league.

“I’m glad Staples fans can see Brendan when he plays at UConn, St. John’s, Seton Hall, Rutgers and Providence.  And the Big East tournament will be held at the Red Bulls’ new stadium in New Jersey, starting next year.”

As for Clark — the former Scottish international goalkeeper — Woog said, “I’ve known Bobby for more than 20 years.  The Staples players who went to Dartmouth when he coached there — guys like Jono Sollinger ’86 and Chris Mitchell ’91 — loved him.  He creates a fantastic team environment.  He’s as passionate about the game as anyone I know.  Brendan is too, so it’s a great fit.”