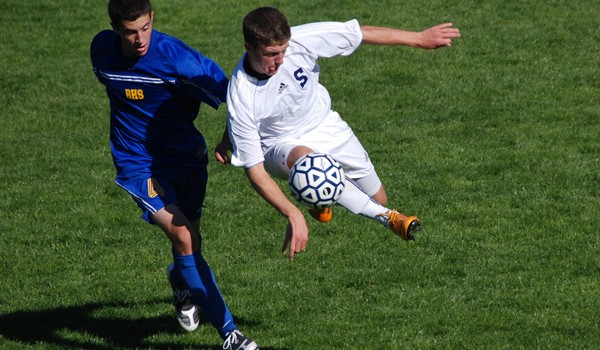 The Staples-Brookfield matchup — one of the best new rivalries in the state — will continue in 2009.

The Wreckers travel north on Saturday, October 10 for a 6 p.m. kickoff.  So far, it is Staples’ only regular season night game (though a few FCIAC foes may change 4 p.m. starts to later times).

“Brookfield is one of the class teams in the SWC — and the state,” said Wrecker head coach Dan Woog.  “It’s great for us to get a 16th game, and test ourselves outside the FCIAC.  I think Brookfield likes this game for the same non-league reason.”

Woog lauded Brookfield coach Jared Sheikh for helping fit the game in, given both teams’ league constraints.  “He’s an excellent coach, with a superb program,” Woog said.  “This is more proof of that.”

The match comes 4 days after a much-anticipated clash at Norwalk, and 2 days before a home contest against always-tough New Canaan.  Wrecker fans are already bracing for a nail-biting few days.

Brendan Lesch gets air last year against Brookfield. He and a host of other returnees will travel north for a rematch on October 10. (Photo by Lisa Krosse)