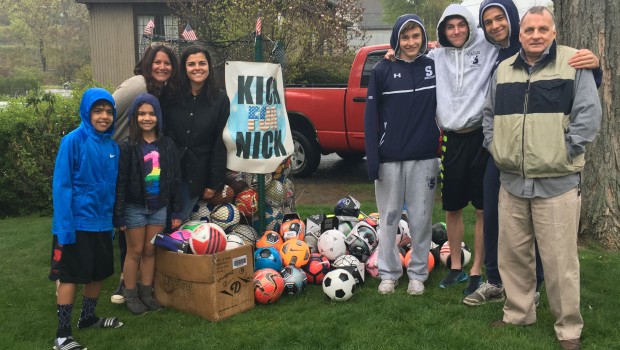 Captains Help “Kick For Nick” Cause

Saturday’s rain did not keep Staples soccer captains Josh Berman, Spencer Daniels and Daniel Reid from delivering dozens of soccer balls and other gear to Kick for Nick headquarters in Wilton. The equipment had been collected the night before, at an AWARE fundraiser in Westport.

Kick for Nick continues the legacy of former Wilton High School soccer player Nicholas Madaras, who joined the military after graduation. While home on leave from Iraq, he rounded up as many soccer balls as he could to bring back to children near his post. Less than 2 months later, he was killed by an IED.

Though he was not able to distribute the balls himself, friends, family and fellow soldiers have taken up the cause. Kick for Nick has become a worldwide project. A decade later, his dream of fostering goodwill and peace through the sport of soccer continues to come true. The Staples boys soccer team’s captains are proud to do their small part. To learn more about Kick for Nick, click here.