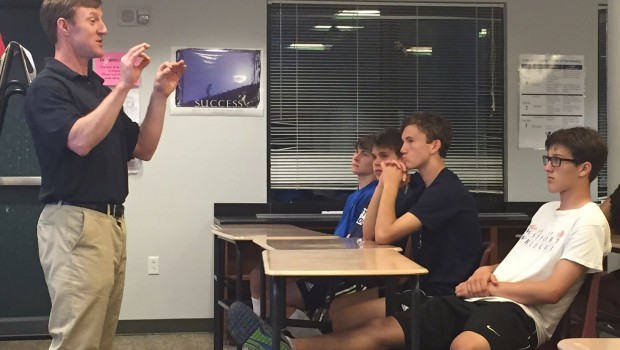 His subject was important: “The College Process.” With insight, wit and plenty of strong examples, Wheeler discussed the differences between Divisions I, II and III; the myths and realities of scholarships; the ins and outs of ID camps; how to write a compelling email and make a quick video, and the importance of personal contacts. His bottom line: know yourself; figure out what you want out of college; be realistic; be honest — and work hard.

Wheeler — who has also been an assistant coach at NCAA national runnerup Stanford University, and played professionally in Zimbabwe — was a teammate of Staples assistant coach Kurt Dasbach on the Westport Over-30 team, from 2001 to 2006.

“It was a great evening,” said Staples head coach Dan Woog, who welcomed players and parents from Fairfield Ludlowe, Fairfield Warde and New Canaan Highs to the event too. “Geoff covered a lot of territory. He opened a lot of eyes. I already got a text from one of our guys who said, ‘I know a lot more now, and I feel a lot more confident.’ We look forward to keeping our college connections going strongly — and to keep that Wesleyan pipeline alive and well!” Kason Kreis (foreground) and others in the large crowd at Staples’ “College Night.”