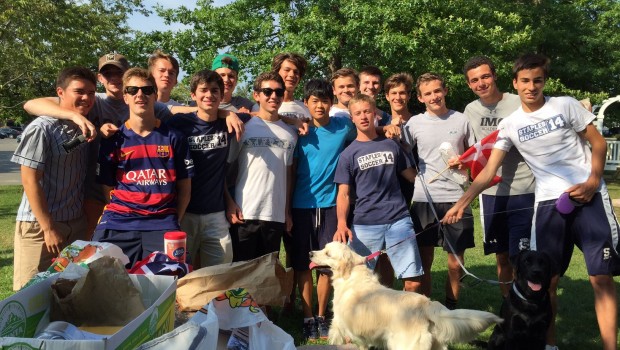 A lobster. A confederate flag. Video of an 840 run in less than 2:45. A grave rubbing. A book written by Dan Woog. Something NYCFC-related. Tabula rasa.

Those were some of the items found, created or otherwise included as part of today’s super-scavenger hunt. It was the final event of the 2015 Jack Scott Octathlon of Champions.

Graham Gudis led his 5-person team to victory in the hunt, which began and ended at the Westport Library. And, when the 10-part event was over (just as the Big Ten has more than 10 teams, the Staples boys soccer octathlon has more than 8 legs), Gudis lengthened his overall lead. The rising senior finished with a record 203.5 points. Jack Zeldes narrowed the gap in the final octo, but still finished 2nd (182.5 points).

There was plenty of creativity today. The lobster was delivered as part of “Dinner for Dan” (other groups delivered a pizza slice, sushi, and reservations at Tengda). For “anything Scandinavian,” Daniel Reid’s team brought his mother. “Something religious” resulted in a bible, mass card and a yarmulke. An “NYCFC-related item” included a locker room pass, and a founding supporter’s scarf. For “brains,” one group trotted out member Max Hammer.

“Our program is based on 2 elements: competition and teamwork,” says head coach Dan Woog. “There was plenty of both today.” Also: lots of creativity and laughs.

Confederate flag (NOT printed out — something real).  3 bonus points if it’s accompanied by a signature from a Southerner. Proof of Southern-ness required.
A photo of a sign at Grace Salmon Park, Pasacreta Park or Luciano Park
Prestidigitation
A business card from any business in Westport that is more than 50 years old.
A photo of Kurt Dasbach or Tom Henske from high school or college days
A text message from any actual 2016 presidential candidate. 3 bonus points if it includes the name of the Staples soccer recipient.
A shopping bag from the grocery store that started out as Clover Farms — but what is it now?
Proof that you crossed the pedestrian walkway on the railroad bridge from the train station over the Saugatuck River (3 points)
A Connecticut state flag OR the Westport town seal
Something religious, from any Westport church or synagogue (proof of where it came from neededAnything Scandinavian
A late pass, signed by Patty McQuone or any Staples administrator — with today’s date
Why is it called Burying Hill Beach?
Grave rubbing from someone who died before the Civil War
A euro bill or coin (any denomination
A live animal of any kind (except a human being) — must be larger than 1 foot long OR weigh more than 10 pounds. Largest one gets 3 bonus points.
Dinner for Dan
A message to the Staples soccer team from a rival FCIAC soccer coach (NOT Fairfield Ludlowe)
It used to be called the Westport Nature Center. Now it’s something else. Bring something from there.
Brains
Video proof of an 840 (Staples soccer tryout style) run in 2:45 or less
Menus from 3 different Westport restaurants
A book written by Dan Woog
Proof that climate change is real
Proof that climate change is not real
Something NYCFC-related (actual, not printed out). 3 points bonus point for the most impressive.
CD recorded by any Staples graduate
Tabula rasa
List of 12 streets (roads, lanes, etc.) in Westport named for people
1st-grade report card
5 remarkable similarities between Lincoln and Kennedy assassinations
A rotary phone Andres Marmelo’s group brought this item as part of the scavenger hunt’s “Dinner for Dan.” Behind a table piled with goods, and including animals, the 2015 Octathlon scavenger hunt competitors gathered for a group photo.