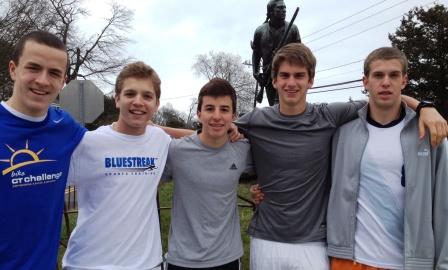 The sophomore midfielder raced to a 20:50 finish in the 5K race (actually, 3.3 miles — slightly over 5K). The course — designed by Ethan Bradeen — started and ended at the Minuteman statue by Compo Beach. It included a hill heading north from Elvira’s, 2 very long hills on Green’s Farms Road, and another tough stretch under the railroad bridge on South Compo Road.

Scott’s victory — on the heels of last month’s win in the Xbox competition — added another 15 points to his 1st-pleace lead.

The Octathlon is an 8-month, 8-event competition for all varsity returnees and last fall’s 11th grade JV players. Each returning varsity player designs and organizes one event.