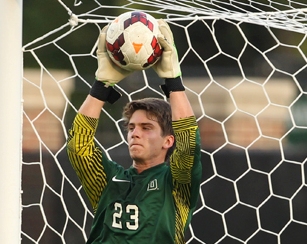 The Dartmouth — America’s oldest college newspaper — has just turned its attention to one of its newest graduates.

James Hickok ’13 — Staples’ All-American keeper, who gets his diploma next month — recently returned from professional tryouts in Scotland and Spain. His college paper interviewed him about his career.

After a promising start his first year at Hanover, Hickok experienced up-and-down times as a sophomore and junior. But, he said, he “transformed” his focus and attitude, and last fall led the Big Green to an Ivy League championship.

“Being able to win that third championship was so special because it was something I had envisioned since I arrived on campus,” Hickok told The Dartmouth. “It was a feeling of true accomplishment because we felt like we had earned that title.”

He called the college athletic experience “really special. Most players overseas do not understand it because they grew up in countries where the system doesn’t exist.”

In Europe, he added, “The guys I met all have families and essentially use soccer as a means to feed their families. That very fact brings about a different edge in the professional ranks. You no longer play alongside your best friends, as I did during my entire career at Dartmouth.”

Hickok is ready for whatever lies ahead. Dartmouth — and Staples — prepared him well.

Of course, he took every opportunity to help himself succeed, too. That’s what champions do.