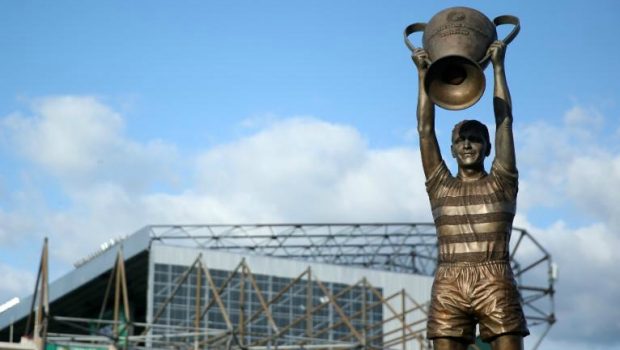 Billy McNeill — the legendary Celtic captain of the only Scottish team ever to win the European Cup — died yesterday. He was 79.

After playing 790 matches for the Glasgow club — winning 9 league titles, 7 Scottish cups and 6 league cups — McNeill also had a successful coaching career. He was hired twice as Celtic coach, and also managed Manchester City, Aston Villa and Aberdeen (where he was replaced by Alex Ferguson in 1978).

Joe Pierce — a native of Scotland, graduate of Rippowam High School, now a successful real estate executive and the producer of a highly acclaimed documentary about the great English layer Sir Stanley Matthews — is also a former junior varsity coach at Staples.

He recalls this meeting with the Celtic star:

“Back in the summer of 1985 I was on holiday in Scotland. I stopped at Celtic Park, and by chance Billy McNeill was walking out the front door.

“I introduced myself, and told him I was on holiday and starting a coaching job at one of the top high schools in the US that fall. He invited me to the team training grounds, and we drove over together.

“I spent the full day by his side. He could not have been more helpful and accommodating. Some of the drills I used with the Staples JV team came from that experience with Celtic. McNeill was a student of Jock Stein who is credited with changing the British game. Sir Alex Ferguson was also a student of the great man.”