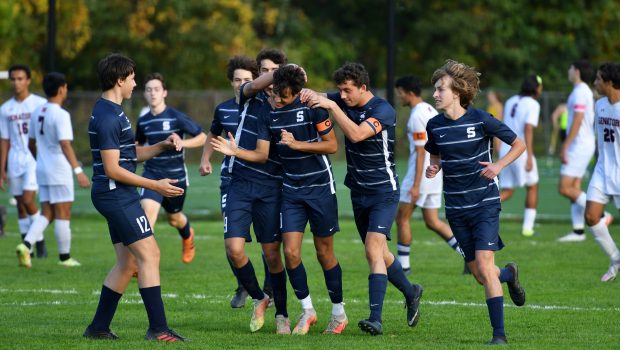 Soccer is a game of emotions.

Staples was flying high after Tuesday’s 1-0 win over Norwalk. The victory leapfrogged the Wreckers over the Bears, into 1st place in the FCIAC.

Today, they came back to earth. They scored early at Loeffler Field, missed several chances to add to the lead, then surrendered a tying goal with 53 seconds to play before halftime.

They had a number of excellent 2nd half chances too, but failed to finish. The Senators, meanwhile — fighting for a post-season FCIAC berth — had good opportunities too.

The 1-1 draw dropped Staples to 9-1-4. They could tumble as low as 5th, pending tonight’s other results. One more regular season match remains: Tuesday, 7 p.m. at Fairfield Ludlowe. The FCIAC playoffs begin next Friday, at the home of the higher ranked team.

The visitors almost equalized off a defensive giveaway, but keeper Jacob Greenberger saved. In the 20th minute the Senators — who were caught offside often — broke through. The shot missed high by inches.

With just 1:30 to play before intermission, a Staples corner kick skipped across the box.

Seconds later, the Senators scrapped in a goal, when the Wreckers could not — in agonizing, slow motion fashion — clear a ball off the goal line.

Staples created opportunities in the second half. Jack Foster sent Caleb Tobias through; his shot slammed off the crossbar. A series of corner kicks also came close.

But McMahon battled equally hard, for the goal they needed to stay alive. Murilo Moreno is congratulated after his early strike against Brien McMahon. (Photo/Mark Sikorski)