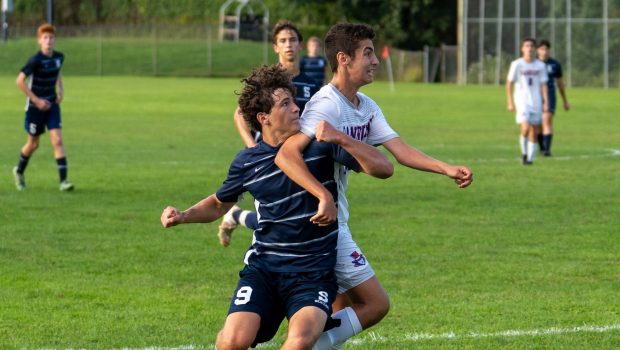 Danbury came to Loeffler Field today with a 2-0-1 record — the same as Staples.

The Hatters were unscored upon so far this year. The Wreckers had given up one goal — a penalty kick.

They were whistled for another PK today, in the 54th minute. But keeper Jacob Greenberger came through with a huge save, to keep the match scoreless.

That’s how it remained. It was the second straight 0-0 draw for the blue-and-whites. And — in hot weather, just like Saturday’s tie with Greenwich — it was equally frustrating.

Once again, Staples controlled possession and tempo. Once again, they played well out of the back, and used the width of their field. But once again, they did not finish the few chances they had.

A slightly tweaked lineup worked well. Sophomore Dylan Hoke earned his first start of the year at midfield, while Matthew Jordan did the same at right back.

Jordan, Jackson Hochhauser, Bruno Guiduli and Hunter Smith did a good job of stepping their line, catching Danbury offsides nearly a dozen times. With Greenberger, they knocked the ball around laterally, and used the sidelines nicely. But there were fonly a few penetrating services into the box, and the Hatter defense kept their clean sheet by denying close-in shots.

The Westporters look to end their scoring drought — and continue their stellar defense — on Friday at Westhill. Kickoff is 4 p.m. FINAL SCORE: Staples 0, Danbury 0. SEASON RECORD: 2-0-2. Will Adams slips inside a Danbury defender. (Photo/Mark Sikorski)