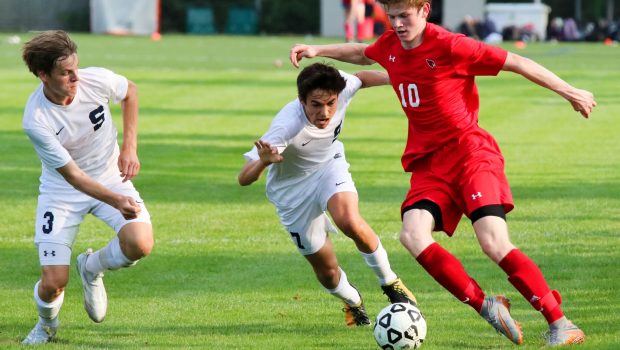 Going into today’s match — under a blazing sun, with a large Loeffler Field crowd — Staples’ seniors had never beaten Greenwich.

The Cards topped them as freshmen. They won JV matches, and varsity games. Last year the teams battled to a scoreless draw in the regular season; then Greenwich eked out a still-controversial 2-1 victory in the FCIAC quarterfinals.

Coming off Saturday’s 3-0 loss at Central — as poor a performance as the Wreckers have shown in years — it looked like the visitors’ streak would hold.

Of course, the score at kickoff was 0-0. That’s why they play the game.

As soon as that kickoff was taken, the Wreckers played with passion and power. They pressured the Card defenders. They got numbers behind the ball. They battled for every 50-50 ball, on the ground and in the air. And they communicated constantly.

Greenwich — as always — proved a formidable foe. Keeper Ry Cohen contributed 2 good saves in the 13th minute. His confidence in the box spurred his team on.

In the 19th minute, co-captain Matt Engler lined up a free kick. The ball rebounded out, 20 yards. Vaughan Sealey pounced. The junior never hesitated, rocketing a shot into the back of the net.

The celebration was joyful. It was Staples’ 1st goal in 3 games.

Anton Mahr and Patricio Perez Elorza pushed into the box, making things happen. They got plenty of support from Engler, Timmy Liles and Will Birch, who covered broad swaths of territory and battled hard.

But Greenwich was equal to the task. It was a back-and-forth half, with little separating the squads.

A 33rd-minute scrum produced a Staples shot off the crossbar, the most threatening foray since Sealey’s strike.

At halftime, the Wreckers talked about continuing to press, defend and battle for every ball. They came out hard — but so did Greenwich. Cohen saved well 2 minutes after intermission.

Engler launched another free kick that hit the post.

In the 55th minute Cohen made an excellent save in traffic. He was knocked to the ground, but held on strongly.

Cohen saved again in the 71st minute, punching away a corner kick. A minute later Liles saved another corner off the line.

The Wreckers had withstood a strong test — and come out on top. They played 80 minutes of good, tough Staples soccer.

For the seniors especially, it was a win worth waiting for — and savoring.

But Staples can’t rest on this one.

And they’re not. They’re already preparing for the next big match: Wednesday at home — against unbeaten Norwalk. FINAL SCORE: Staples 1, Greenwich 0. SEASON RECORD: 3-2-2.

QUICK KICKS: The match began at 4:30 p.m. — half an hour later than usual — because of Greenwich’s late school start time…

The reserves lost 2-0 to Greenwich….

The freshmen suffered their 1st loss of the year, 4-0 at Greenwich. Nick Hein defends for the reserves against Greenwich. (Photo/Armelle Daniels)