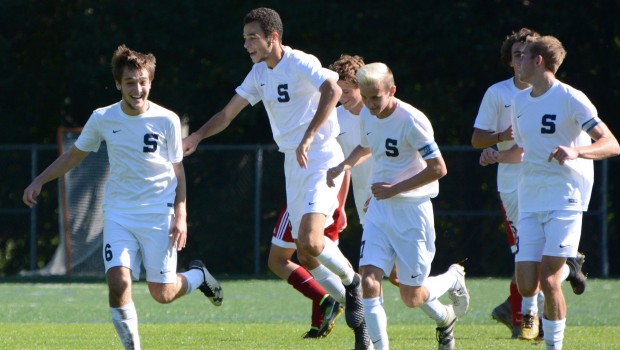 The largest crowd of the season packed The Hill on beautiful fall afternoon, to watch the Wreckers battle the Rams.

Both teams battled for different things. Staples was fighting to nail down an FCIAC playoff berth — with possibly a 1st-round home match at stake. New Canaan wanted to keep their state tournament hopes alive.

Staples’ defense was in its typical slide-together, step-up mode. Teddy Lawrence continued his feisty flank play; Josh Berman was a tall, strong presence in front, and Chris Martenson swept up the rare ball that got through.

Stephen Rowland got the call up top, and helped his side apply early pressure. Other attackers – Spencer Daniels, Tyler Wright and (making his 1st varsity appearance) Azam Plummer — also kept the ball in the Rams’ end for long spells.

Staples’ other midfielders won more than their share of balls, and distributed well. Daniel Reid took balls into the corner with pace; Thomas Nealon worked the left side with skill and speed, and Will Birch and Timmy Liles came on with no letup at all.

As often happens, keeper Ziggy Hallgarten made one key save in the match, which made all the difference. This one came in the 10th minute, on a ball deflected goalward by a defender on the end line. The senior quad-captain extended his long arms, stopping an all-but-certain goal.

Six minutes later, Broccolo took a throw. Rowland headed it straight up in the air, but when it landed Mahr kept it from bouncing over the end line. He slammed it into the box, where a scrum of Wreckers and Rams batted it around. Eventually the ball landed at Berman’s feet, and the quad-captain/defender stuffed it home.

The guests got the equalizer 6 minutes after that, on a bouncing ball off a poor clearance.

Staples went right back to work. In the 31st minute, Mahr laced a corner kick that Lawrence skimmed in with his head.

The 2nd half saw Luca Cocito and Rory Steele come on as attackers. They made good things happen too, as the Wreckers pressed for the insurance goal.

It did not come. They had a few near-misses — including a free kick by Birch, a Berman header that skidded just wide, a shot by Nealon and a header by Lawrence off the post — and at other times did not pull the trigger quickly enough.

But the huge crowd got what they’d come for: a Wrecker win. Staples edged 3 points closer to that FCIAC playoff spot — no easy task, in an FCIAC filled with parity.

And if they make the tourney, they’re now 3 points closer to a home game in the opening round. FINAL SCORE: Staples 2, New Canaan 1. SEASON RECORD: 7-2-5.