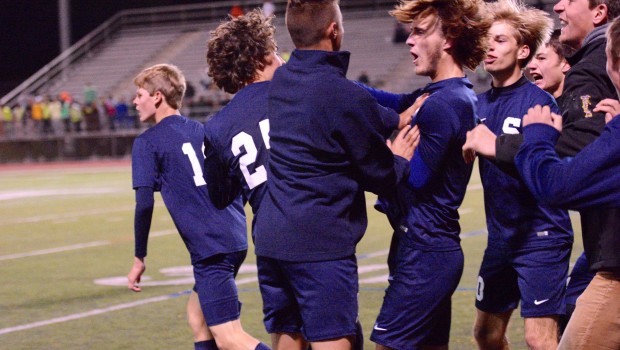 They entered today’s match at Testa Field with a 4-5-1 mark. But that’s deceiving. They started the season missing 6 starters. Since fielding a full squad, they’ve been on a tear.

Norwalk owned the 1st 20 minutes tonight, putting their mark on the game with team and individual speed, and a spirited style that won them the majority of loose balls. Slowly the Wreckers pulled themselves back, but they entered halftime down 1-0. Sebastian Echeverri’s 14th-minute goal — a solid finish from close-in, off a slot from the corner — was the difference.

Staples ground it out in the 2nd half. They had much more possession, and pressured their hosts strongly. But the Bears’ defense was more than up to the task. Suddenly — with just 5:27 to go — the Wreckers struck. Will Birch’s free kick from the far right corner — taken almost like a corner kick — found Teddy Lawrence. The defender is sent forward for plays like this, and his header into the far corner arced high over the keeper.

Both sides had chances as the clock ran down. Both had to settle for 1 point in the standings. Both will likely see plenty of post-season play. FINAL SCORE: Staples 1, Norwalk 1. SEASON RECORD: 6-2-4.

QUICK KICKS:  The goal against Staples was the Wreckers’ 1st in 465 minutes….

Jannis Dietze earned Man of the Match honors for the Wreckers, for his midfield play on both sides of the ball….

Coach Nicky Hoberman reports on the reserves’ 1-1 draw with Norwalk:

Staples brought the same intensity and energy today as they did in their previous match against Fairfield Ludlowe. Off the field there are many friends between Staples and Norwalk, but today’s game did not show that. It was a physical, fast paced, and cold afternoon that provided exciting soccer. Norwalk struck first off a well placed shot from outside the box. A great strike! Staples battled back and almost scored immediately following the kickoff. The Wreckers got fired up during half time. Only a minute and change into the 2nd half, a soaring Ryan Fincher, put away a signature Brad Cox corner kick. This marks Fincher’s 3rd goal of the season (as an outside back), all off set pieces. Staples had many chances throughout the rest of the game. Nick Ambrose took on the Norwalk defenders and continued to work down the wings, while the defense stood tall against the fast moving Bear attackers. With the game nearing an end, a cross into the box found the thigh of Ethan Brodows and continued into the back of the net. Staples celebrated, but their excitement was disrupted with a call of hand ball — and a final whistle. The game ended 1-1, with Staples having most of the play….

Captain Jake Didner described Fincher’s goal: “It was like he flew well above the defense … the defenders and goalie had no chance.” Hoberman called the game “LIT AF.” When asked for an explanation, he said it was one of his team’s best — if not the best — game of the season.

Teddy Lawrence (center) is mobbed by his Staples teammates, after scoring the tying goal at Norwalk. Just over 5 minutes remained. (Photo/Frances Rowland) Will Birch gets air. He also got the assist against Norwalk. (Photo/Armelle Daniels) Sam Kantor had another fine outing in Norwalk. (Photo/Armelle Daniels)