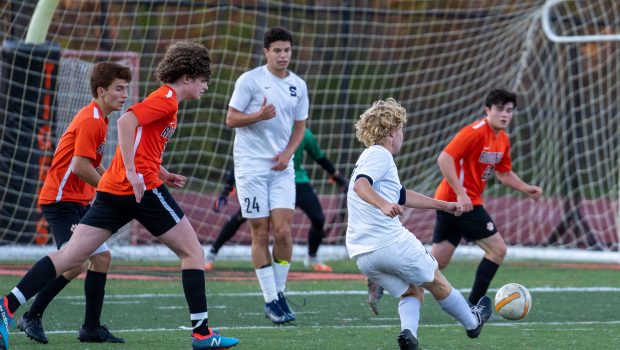 During this COVID year, the FCIAC has been split into 3 groups. Each team plays only those within its pod.

The Central Division — Staples, Danbury, Wilton, Norwalk, Brien McMahon and Ridgefield — is the toughest. There are no easy games.

In fact, says Dave Ruden — whose Ruden Report covers everything related to the FCIAC — it may be the most balanced and difficult of all sports in the entire league.

After losing the first game of their first 2 home-and-away series, then tying the rematch — including Monday’s hard-fought draw with Wilton, the first non-win for the Warriors this year — the Wreckers went to Ridgefield in search of their elusive initial win of the year.

Just 2:47 after the opening whistle, it looked like the visitors were on their way. George Smith found Haydn Siroka. The big, strong striker curled a gorgeous long-range shot into the far right corner. It was one of Staples’ quickest strikes in years.

But a series of injuries — 3 to Ridgefield in the first 5 minutes, plus Wrecker co-captain Jack Douglas — along with a slew of fouls and balls out of bounds prevented either side from finding a rhythm. Surya Balaji’s well-taken penalty kick in the 19th minute doubled Staples’ lead.

Yet the first half continued in fits and starts. The hard Tiger Hollow surface — with plenty of bouncing balls — was not conducive to good soccer either.

Alan Fiore’s rip almost connected. So though the scoreboard read 2-0 at halftime, the blue-and-whites were not pleased with their play.

They were less pleased a few minutes after play resumed. A failure to clear the ball in the box halved their lead.

Keeper Enzo Valadares saved in the 52nd minute. Then he saved a corner kick. The Wreckers were ceding far too many corners, and the Tigers were knocking on the door.

It was an important moment, because at the 57:00 mark Ridgefield drew even, on a penalty kick of their own.

Finally, the Wreckers responded with passion, poise, smart play and grit. For the final 20 minutes — with Smith in command on both sides of the ball, Zach Pulichino settling down the midfield, Balaji directing the defense of Foster, Jackson Hochhauser and Bruno Guiduli, and Barnes, Siroka, Reese Watkins, Will Adams and Marcos Inglada applying pressure up top — the fans in the stands and watching on livestream started seeing Staples soccer.

They also saw Alan Fiore. He created havoc, with runs up the left side and cuts into the box.

In the 70th minute, Foster played a ball to Pulichino. He delivered a well-timed, perfectly weighted pass. Fiore had come close several times. This time he delivered a clinical finish.

Ridgefield once again tried to battle back. But down a man, following a red card ejection, they were stymied by Staples. The Wreckers managed the game well — and managed to leave Tiger Hollow with a not pretty, but quite welcome, win. FINAL SCORE: Staples 3, Ridgefield 2. SEASON RECORD: 1-2-2.

QUICK KICKS: Next up: the rematch with Ridgefield. It’s set for 4:30 p.m. Monday, at Albie Loeffler Field. George Smith: a force at midfield against Ridgefield. (Photo/Brian Watkins) Alan Fiore got the game-winner at Ridgefield. (Photo/Barry Guiduli)