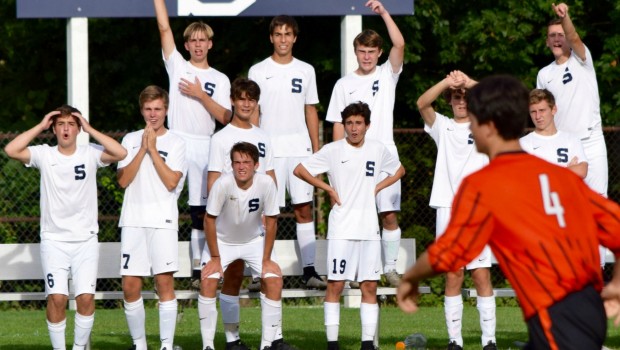 The Wreckers’ defense — led by Teddy Lawrence, along with Sam Kantor, Chris Martenson, Matteo Broccolo and Josh Berman — was air-tight against Ridgefield. Keeper Ziggy Hallgarten had little to do, but did what he had to do well.

Communication was solid. Midfielders Thomas Nealon, Matt Engler, Timmy Liles and Daniel Reid — plus sophomore Jannis Dietze, making his 1st start — moved the ball well all over the field, and cut off most Tiger threats.

But no one finished. The Wreckers shot high. They shot wide. They missed sitters. They ended great build-ups with weak shots at the keeper. A number of players had opportunities; they’re the ones who will be replaying their chances in their heads.

The result was a thoroughly unsatisfying 0-0 draw. Staples looked much sharper than in previous FCIAC contests — but they ended up with 1 point in the standings, not 3.

“We saw a lot to like today,” said head coach Dan Woog. “But we’d like it a lot more if we had gotten a goal out of all that we created. This is one of those real frustrating matches. We feel good about many things. But we feel unsatisfied about others.”

On Thursday, Central comes to Loeffler Field. It will be the Wreckers’ 5th home game, in their 1st 6 of the season. FINAL SCORE: Staples 0, Ridgefield 0. SEASON RECORD: 1-2-2.

The annual Staples soccer car wash is this Saturday (September 24, 10 a.m.-4 p.m.) at the Christ and Holy Trinity Episcopal Church parking lot downtown, across from the Spotted Horse restaurant….

The reserves shut out Ridgefield 2-0. Chris Andrews stole a pass, and chipped the keeper. In the 2nd half, Ryan Fincher finished off a Nick Ambrose corner kick. Jared Wainshal and Ethan Brodows looked strong for the dominating Wreckers….

The freshmen topped Ridgefield 5-2. Benny Feuer scored a hat trick; Aiden Rose got the other 2. Callum Wisher and Lars Djuve both performed well too. Matt Engler and Timmy Liles are not fazed by a flying Ridgefield keeper. (Photo/Frances Rowland) No matter what the officials say, soccer is a contact sport. (Photo/Armelle Daniels) Jannis Dietze made the most of his 1st start, against Ridgefield. (Photo/Armelle Daniels)