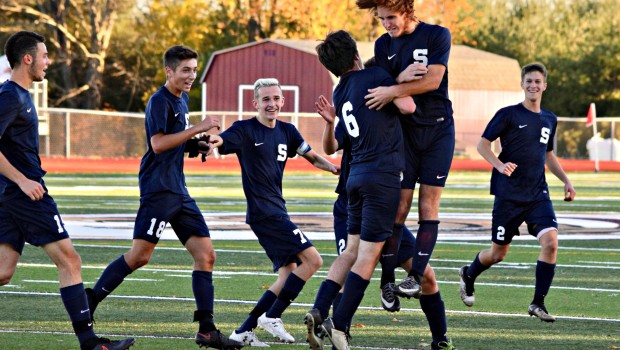 Staples and South Windsor is not a fabled match-up. The 2 teams had faced each other only twice before today, each winning once.

But the Wreckers were ready. Ready for the Bobcats’ control, move-through-the-middle-and-spring-a-man offense. Ready for them to push forward.

And ready for the state tournament to begin.

The blue-and-whites — ranked 21st, so the team that traveled 80 minutes — started strongly, on a gorgeous fall day. Thomas Nealon earned an instant free kick at the top of the arc. It didn’t work — but that did not stop Staples.

Despite a layoff of 12 days — interrupted only by an excellent scrimmage at Joel Barlow — Staples’ passing game was on. Nealon and Anton Mahr pressed well. Matt Engler’s return to midfield after a broken wrist was welcome. He partnered nicely with Jannis Dietze.

The best opportunity of the 1st half came in the 25th minute. Half a dozen passes led to a rip by Engler. It was destined for the top corner. But sophomore keeper Hunter Pasqualini parried it away, with a Ziggy Hallgarten-esque save.

The defensive play of the half was Chris Martenson’s stunning tackle deep in his end, followed by a sweet dribbling exhibition. He hit Daniel Reid with a pass, and that effort almost connected too.

The Bobcats came right back. With Hallgarten out of the box, trying to find the ball in the blinding sun, a shot was just wide.

As they have often this year, Staples ramped up the 2nd half. Sam Kantor laced a long free kick. Nealon charged in on Pasqualini. Teddy Lawrence roared forward with a header. Spencer Daniels hit Nealon; his shot was saved, then Reid’s rebound was also stuffed.

In the 50th minute — with defender Josh Berman pushing his squad forward — a South Windsor defender was called for a hand ball in the box. It was only the 2nd penalty kick of the year for the Wreckers. Nealon slammed it home.

Sensing a chance to put the #12-seeded Bobcats away, Daniels fired. Nealon had 2 more shots. Staples came on stronger than ever — and shut down South Windsor’s few counters.

In the 71st minute, Nealon took a corner-like free kick. Lawrence headed it back across the box, and Stephen Rowland stuffed it in. But — for at least the 3rd time this season — the goal did not count. Staples was offside.

No matter. The Westporters continued to push. They played well, and with intelligence. They managed the game.

Their victory was well earned. It was a long time coming. But it could give them the push and momentum they need.

Their next test comes Thursday. New Milford (#5) was pushed to the limit by #28 Xavier. But the SWC squad prevailed 3-1, in overtime.

That 2nd round contest will be played at New Milford, at 2 p.m. Teddy Lawrence gets into it with Andrew White. (Photo/Armelle Daniels) Anton Mahr has the inside track on Kyle Foley. (Photo/Armelle Daniels) This celebration of Stephen Rowland’s (#6) goal was premature. He was ruled offside. But Josh Berman, Matt Engler, Daniel Reid, Teddy Lawrence, Sam Kantor — and all the Wreckers — were happy 9 minutes later, with a 1-0 victory at South Windsor. (Photo/Armelle Daniels)