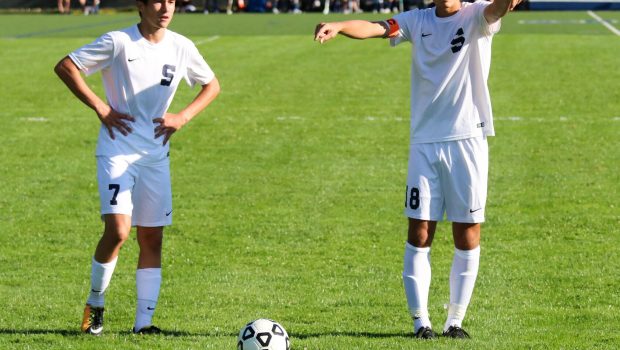 Trinity Catholic’s soccer program has not had it easy. An “S” (smallest division) school in a league dominated by “LL” (extra large) and “L” (large) schools — and one of only 2 in the FCIAC that charges tuition — the Crusaders have struggled for years.

Over the past few seasons, under coach Bob Pepi, they’ve made strides. This year, with new coach Michael Martino, they’re poised to progress further.

Today at Loeffler Field though, a vocal crowd saw the host Wreckers in control from the opening whistle.

Shooting low, hard and often, they were stymied by keeper Luis Benitiz. Timmy Liles, Anton Mahr and Matt Engler all tested the visitors — and the crossbar — before finally netting that elusive first strike. Strong ball movement across the field ended with Mahr finding Liles. He slotted it low, in the 18th minute.

Two minutes after that, Mahr’s shot was saved. But Liles’ brother Sam followed up alertly, for the 2nd goal.

Mahr also fed Engler in the 51st minute. The co-captain wheeled, dealed and sealed the victory with a close-range shot.

With opening day behind them, the blue-and-whites now turn their attention to Monday’s match. Danbury — not just the biggest school in the FCIAC, but in the entire state — provides a much sterner test. Kickoff is 4 p.m., at the Hatters’ stadium. The Wreckers huddle before the opening match against Trinity Catholic. (Photo/Alan Frost)